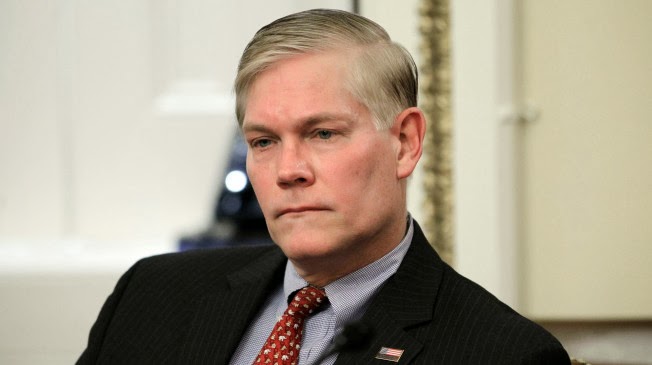 Once again we are seeing the hypocrisy of Republicans who wear their feigned religiosity on their sleeves even as they trash the Gospel message by slashing programs benefiting the poor and unfortunate and working to deprive millions of access to health care.  Now, Rep. Pete Sessions (R-TX) - pictured above - has alleged that extending long term jobless benefits is "immoral."  If there is anything immoral, it is the GOP's agenda to make most Americans modern day serfs while the wealthy reap more and more wealth and privilege.  Supporting this agenda all the way, of course, are the "godly Christian" crowd of the far right. Talking Points Memo looks at Sessions' batshitery.  Here are highlights:

Rep. Pete Sessions (R-TX) on Tuesday railed against efforts by Democrats to extend long-term unemployment benefits, which expired at the end of 2013.

"I believe it is immoral for this country to have as a policy extending long-term unemployments [benefits] to people rather than us working on creation of jobs," he said on the House floor, as quoted by the Huffington Post. "A job is the most important attribute, I believe, in a free enterprise system."

Sessions said President Obama spends too much time speaking about the longterm unemployed and to little time facilitating legislation that would help create jobs.

"Too much time we have been hung up on, instead of the creation of jobs, we talk about the symptoms that are related to unemployment, and long-term unemployment," he said. "In this case, the president of the United States thoughtfully articulates the need for us to make sure we help people, but I believe he errs on the side of not pushing jobs bills."

Benefits for those who have been unemployed for six months or more expired on Dec. 28, 2013, leaving 1.3 million unemployed Americans without critical assistance.

Sessions conveniently ignores the reality that he and members of the GOP controlled House of Representatives have blocked every effort by Obama and the Democrats to pass a meaningful jobs bill.  The man is despicable.  More of his bigotry and shady ties can be found here (scroll down)