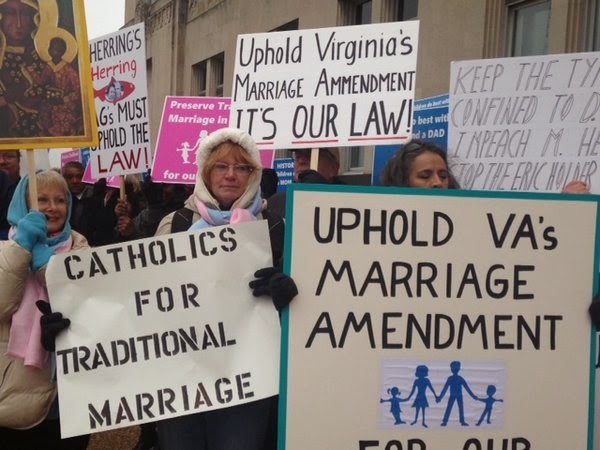 As noted in posts yesterday, the Christofascist continue to put forth the same tired justifications for Virginia's same sex marriage ban as we have heard time and time again and which, except for the marriage case in Nevada now on appeal to the 9th Circuit Court of Appeals where the Nevada Attorney General may be about to cease defending the Nevada marriage ban, has been rejected every time in the federal courts, including the Supreme Court in the Windsor case last summer.  CBN News lays out the Christofascist defense of anti-gay discrimination:

"Virginians believe as they always have that every child has a right to know, be loved and raised by the mom and dad that brought them into this world. That's an imminently reasonable argument. Marriage is ancient because it's reasonable and is dependent upon the diversity of the sexes -- men and women -- the complementarity of men and women, and that's why marriage laws are constitutional, and we believe they should be upheld," Austin Nimocks, from ADF, said.

The other favorite argument is that a majority of Virginian's voted for the ban and that, therefore, it must be upheld.  This argument ignores Virginia's sordid history where at one time a majority of voters supported slavery, segregation and the Jim Crow laws and bans on interracial marriage.   If any state should know that majority support doesn't make something right or constitutional, it should be Virginia which has been repeatedly bitch slapped by the U. S. Supreme Court.

In short, the Christofascist persist in their disingenuous effort to disguise the root motivation behind every same sex marriage ban in America: religious based bigotry and animus towards LGBT people.  The protest signs at yesterday's demonstrations underscored that religion - that ban of mankind's existence - is their real motivating force.