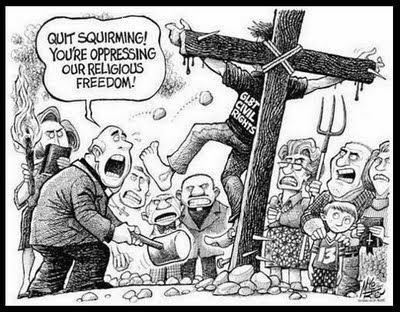 As LGBT Americans have gained additional civil rights - often as a result of state and federal court decisions - the Christofascists have begun shrieking that their rights of "religious freedom" are under attack.  Indeed, hate groups like Mission America have been disseminating screeds that claim that gay rights are incompatible with Christians' religious freedom.  Now through a network of hate groups "family values" organizations is pressuring state legislators (read Republicans) to pass bills that would exempt Christofascists from non-discrimination laws applicable to other citizens.  It is yet another example of far right Christians demanding special rights and believing that they are above the civil laws.  One can only hope that these laws are not enacted or, if they are, they are struck down by the courts.   Aljazeera America has details.  Here are highlights:

If a bill approved by the Kansas House Committee on Federal and State Affairs Thursday becomes law, businesses and government employees could legally refuse service to citizens because of their sexual orientation or marital status, claiming it violates their religious beliefs.

HB 2453, if passed, would permit “any individual or religious entity” to claim an exemption, based on religious views, from providing nearly any kind of services, and to be relieved from “treat(ing) any marriage, domestic partnership, civil union, or similar arrangement as valid.” Although the bill would require government agencies to make another employee available to provide the service if one employee objects, opponents of the bill say that arrangement could prove unworkable in small locales.

The Kansas measure is an extreme permutation of a wave of new bills in state legislatures that purport to bolster religious freedom, but that opponents say constitute a troubling new trend to craft a license to discriminate based on sexual orientation, gender identity, and marital or family status. The state efforts are apparently connected to a network with the Christian advocacy group Focus on the Family at its core.

“We are really seeing this dovetailing with LGBT people across the country gaining greater rights,” said Eunice Rho, advocacy and policy counsel at the American Civil Liberties Union, which opposes these bills. “We are now seeing this reaction where people are claiming based on religious belief that there should be special authorization to break laws or have new rights.”

[C]onservative legislators are also reacting to the possibility of same-sex marriage bans being struck down, as federal cases decided in Utah and Oklahoma move through the courts — and Witt said the Kansas bill would give government employees the right to refuse service even if same-sex marriage were legal in the state.

The Kansas Family Policy Council, a Christian conservative group in favor of the bill, said in an alert to its members that the bill “would extend important legal protections to individuals, business owners and religious institutions when it comes to their rights to stand on their religious views when declining to participate in and celebrate homosexual ‘weddings.’”

In addition, a bill moving through the Arizona Senate specifically identifies corporations as parties with religious freedom to be protected — one of the issues the Supreme Court has been asked to take up in cases brought by Hobby Lobby and Conestoga Wood in their challenges to the contraception coverage.

Cornerstone in Idaho, the Kansas Family Policy Council, and the Center for Arizona Policy, which supports the bill there, are all part of a network of 38 state “family policy councils” pressing for these laws under the umbrella of Citizen Link, the advocacy arm of the conservative Christian powerhouse Focus on the Family.

These bills evidence a frightening trend and demonstrate that the Christofascists need to be forced to obey the same laws as all other citizens.  One definitely has to wonder when Focus on the Family will get the hate group designation that it so richly deserves.

If something like this became law, just ask everyone of they believe in evolution. If they don't, then refuse to serve them. It can work both ways, and if enough people stand up, then those idiots will be marginalized.