The Republican Culture of Death 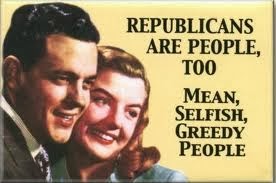 We constantly hear Republicans and far right talking heads making outrageous claims about Obama death panels and the liberal left supporting a culture of death.  Truth be told, however, it is the Republican Party and its Christofacist/Tea Party base that is the real force behind a culture of death.  Why? Because many aspects of the GOP platform lead to unnecessary and otherwise avoidable deaths.  All the sanctimonious claims of "respecting life" will not wash away the blood on the hands of these people as they oppose health care expansion for the poor and unfortunate, seek horrific cuts to food stamps, throw unemployed workers to the gutter, and push for unrestricted gun ownership that results in avoidable gun related deaths virtually every single day.  A piece in the Loudoun Progress looks at this reality.  Here are highlights:

When is it okay to start talking about the fact that Republican policies actually kill people?
The most obvious example is Republican support for our government killing people, explicitly and in cold blood. That’s what the death penalty is. State sanctioned killing of a citizen in cold blood. Regardless of your position on the morality or constitutionality of the death penalty, it is, quite simply, support for state-sanctioned death. And as an example of the bedrock principle for Republicans that the state should be allowed to kill its citizens, there is no better example.

How about Republican’s opposition to reasonable gun safety legislation? To the point of actively repealing gun safety legislation already in place when they take control of a state? Did you know that Missouri repealed background checks for gun purchases recently? And when it did, gun murders went up 25%?  “Hey, this legislation will cause more people to be violently murdered!”  “Great, let’s do it!”

Or the 17,000 women who will die because Republican-controlled states refuse to expand Medicaid?


“We calculated the number and characteristics of people who will remain uninsured as a result of their state’s opting out of the Medicaid expansion, and applied these figures to the known effects of insurance expansion from prior studies,” lead author Samuel Dickman said. “The results were sobering. Political decisions have consequences, some of them lethal.”

So again I ask, when can we start talking about the fact that Republican policy positions seem to revel in a culture of death?

Sadly, much of the mainstream media is too lazy to challenge members of the GOP on such issues and instead mere repeats their talking points as if they were true.
Posted by Michael-in-Norfolk at Tuesday, February 04, 2014