Coke Ad Underscored Racism of the GOP Base 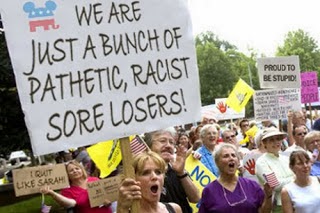 I've looked at the growing and often open racism that is becoming one of the pillars of the Republican Party's agenda.  Frequently, GOP elected official try to use dog whistle lines that will resonate with the party base while not openly offending the larger public.  But sometimes that the hatred and swamp fever sickness of the party base simply explodes into open view.  A case in point is the reaction of so  called conservatives - I'd call them white supremacists - to the ad aired by Coca-Cola during the Super Bowl last Sunday.  There is simply no way to put lipstick on this element of the GOP base and try to claim that they are decent people who can see the common humanity of others.  Michael Gerson looks at (and tries to down play) the spittle flecked reaction that exploded across the Internet and what it says about the Republican Party.  Here are column highlights:


Just after House Speaker John Boehner affirmed the eventual need for Republicans to embrace immigration reform, a commercial for a carbonated beverage, of all things, demonstrated how difficult that process is likely to be.

Coca-Cola’s Super Bowl ad featured a series of multicultural images set to “America the Beautiful,” sung in seven languages. It turned out to be a national Rorschach test. The immediate reaction of some — myself included — was a lump in the throat. There is something moving about hearing American ideals of brotherhood, reverence and sacrifice praised in other tongues. It is the universality of these longings that makes them powerful.  . . . Some hopes belong to everyone.

The immediate reaction of others — measured by Twitter and talk radio — was that the ad represented an aggressive and divisive multiculturalism and that American national songs should be sung in English (though conservative blogger Erick Erickson smartly noted that “E Pluribus Unum isn’t in English either”). Fox News radio host Todd Sarnes called Coca-Cola “the official soft drink of illegals crossing the border.” Former congressman Allen West (R-Fla.) declared America “on the road to perdition.”

Some looked at those images and saw an affirmation of the universality of American ideals; others saw a violation of the particularities of American culture, such as the use of English. Some saw exceptionalism and strength; others adulteration and threat.

As a policy issue, immigration reform is complex, with serious arguments about the economic effects of migrants on the native-born working class and serious questions about more adversarial forms of multiculturalism. But it is this immediate reaction, this habit of mind, that has large political implications.

After decades of participation and reflection, here is my proposal for the most basic truth of politics: Human beings know if they are welcome at a party or not. . . . For this reason, effective ethnic politics (and not just ethnic politics) is actually a form of hospitality: Please make yourself at home.

“People don’t care how much you know,” said my old boss, the late Jack Kemp, “until they know how much you care.” Sometimes politics really is this simple. After all the arguments about economics and assimilation, people understand if they are viewed as a threat to the predominant culture. They know if their voice is not welcome in the national chorus. And this does have implications for political philosophy.

The shift to a more welcoming GOP message toward immigrants won’t happen in a single rush. It is not reasonable to expect Boehner to buck much of his conference without broader reinforcement. This will take donors and business groups willing to support pro-reform House and Senate candidates against tea party challenges  . . . . And it will require a presidential candidate in 2016 who offers something more than walls topped in barbed wire and self-deportation.

But the most important change that is needed is the hardest to achieve: A genuine welcome to the party. And an honest prayer: Dios derramó su gracia sobre ti.

Frankly, Gerson is engaged in a fantasy if he expects this change to happen.  Given the way the GOP surrendered the party grass roots to Christofascist - most of whom are racists - and white supremacists changing the course of the GOP will be like trying to keep the Titanic afloat after if hit the ice berg.  Combined with this is the reality that no one in the GOP leadership has the guts  or common decency to call out the nasty elements of the party base.
Posted by Michael-in-Norfolk at Friday, February 07, 2014