Why Athletes in Sochi Must Speak Out About Russia's Intolerance. 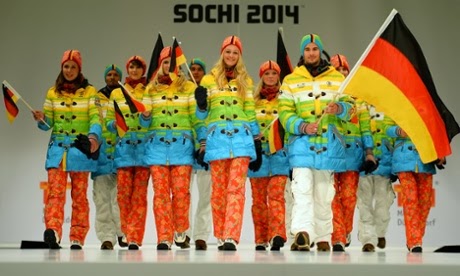 Speaking out sometimes carries negative consequences.  But the alternative is, in my view, selling  your soul to the forces of darkness.  Former Minnesota Viking Chris Kluwe knows all about the negative side of advocacy having been fired he believes for his outspoken support for LGBT equality and same sex marriage.  At the end of the day, Kluwe can look at himself in the mirror with pride and know that his was never quiet and complicit in evil.  (On a far lesser scale I refused to remain closeted at work and lost my job when my law firm was acquired by a larger law firm.)  Now, Kluwe has an op-ed in The Guardian urging Olympic athletes in Sochi to refuse to remain silent.  Here are op-ed excerpts:

The Olympic Games in Sochi begin Friday. Controversy and doubt swirl around these games, this abysmal excuse of "Olympic Spirit" we seem determined to celebrate this year, despite all the hate and stupidity and human rights violations they represent. Vladimir Putin, dictator of Russia in all but name, appears content to ignore the lessons of history – namely, that you cannot oppress a group of your own citizenry forever without them eventually rising up against you. Unfortunately, the corporate sponsors of the games appear content to ignore it along with him.

"Today's refreshing anti-gay beating brought to you by Coca-Cola!"

"Visa goes everywhere you want to be, and takes you places you don't want to be, like a gulag in Siberia if you support LBGTQ rights!"

"GE, we don't just make your washers and dryers, we also wash our hands of the truth about bigotry and ignorance!"

The International Olympic Committee (IOC), chief benefactor of these big money sponsors, has determined that any athlete speaking out in "accredited areas" against the human rights violations occurring in Russia right now will be found in violation of the Olympic Charter, banned from the games, and stripped of any medals. Corporate sponsorships, the pot of gold at the end of the Olympic rainbow, will disappear. . . . politicized in no small part by the IOC refusing to uphold their own charter when it applies to themselves.
How can the IOC get away with this blatant disregard of their own rules? Easy. The IOC has what Olympic athletes want. Money. Power. Fame.

I've been famous. As a professional athlete, even as a lowly punter, it comes with the territory. . . . I've had money. Playing eight years in the NFL means I've made close to what a good doctor will make in his or her lifetime, and I've tried to be smart with it.
I had power, a platform. Rightly or wrongly, our society regards athletes as role models, people to look up to, to emulate. For most of my career, I didn't use my platform for much. I was content to stay silent and collect my paychecks.

I talked about important issues with my friends and family, but I never really took it public.Then, one day, I decided to use my platform. I decided to speak up for those whose rights were being trampled, to actually use the position society gifted me to say something meaningful, something other than sports cliches.

I decided to stand up for those who needed help, because they asked me to, and because it was the right thing to do. I knew it could cost me my job, my career, and I didn't care (OK, I cared a little bit, but I did it anyway), because if I didn't speak up for someone when they asked me to, how could I expect the same in return?

The result? I lost my job, one of the most highly sought after jobs in the world, professional athlete in the NFL, for speaking out on LBGTQ rights.  . . . . but knowing how it would turn out, knowing the cost, I wouldn't do it any other way, not for all the gold in the world.
What is the true price of fame? The price of fame is what you risk when you have the platform. As an athlete, a role model for society, people listen to you. As an athlete, when you make a statement, that statement is heard, no matter what that statement is.

I hope that athletes speak out at Sochi on LBGTQ issues, even knowing the possible risks that await them.

I know that it's one of the hardest steps a person can take, and that there is no guarantee of a reward at the end, other than knowing you did the right thing at the right time with nothing to show for it but angry tweets and emails tempered by the messages of support and affection from those in whose lives you made a difference, those currently being abused by the oppressive and ignorant.

I will tell you this – I've been there, I've walked that path, and though it's a rocky, and frankly, terrifying one, know that there's no amount of money in the world that can buy a step there. There's no medal to hang around your neck that signals you did the right thing, no corporate endorsement to pay your bills and keep you secure in the future. If you walk that path, there are always consequences. But when you walk it, you do not walk alone. You may never know the people whose lives you change, but the change will happen nonetheless..