Del. Bob Marshall - The Face of Anti-Gay Animus in Virginia 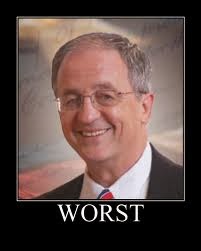 Some politicians focus their legislative efforts on improving public education, improving infrastructure, attracting new job creating businesses, and so forth.  Not Del. Bob Marshall.  His reason for being is to persecute LGBT Virginians and put his personal religious based animus towards gays in action.  Other than Victoria Cobb of the Family Foundation, Matt Staver at Liberty University and the increasingly insane Pat Robertson, there is no one more viciously anti-gay than Bob Marshall.  Yet, ironically, it may be statements made by Marshall and former attorney general Ken Cuccinelli who help make the case that anti-gay animus was the main motivation behind Virginia's same sex marriage ban.  In the plaintiff's pleadings in Bostic v. Rainey examples of their anti-gay animus are laid out (Marshall was a backer of House Bill No. 751).  Here's a sampling:

12. House Bill Number 751 also included in its “legislative findings” that there are “life shortening and health compromising consequences of homosexual behavior” that inure “to the detriment of all citizens regardless of their sexual orientation or inclination.” Id.

14. In 2004, Robert Marshall, one of the co-sponsors of House Bill Number 751, authored an article in The Washington Post in which he referred to marriage between gay and lesbian individuals as “counterfeit marriage” and stated that the Affirmation of Marriage Act was “needed to resist the agenda of activist homosexuals” because the “danger” they posed was “real.” Lustig Decl. Ex. B (The Washington Post, No “New Jim Crow” in Virginia, July 3, 2004).

21. Then-Virginia Senator (now-Attorney General) Kenneth Cuccinelli urged his colleagues to adopt the Marshall/Newman Amendment by claiming “[t]he homosexual left has been on the attack against marriage and family for 40 years,” and that the amendment was necessary for “regaining lost ground.” Lustig Decl. Ex. E (The Washington Post, Va. Senate Backs Ban on Gay Marriage, Feb. 8, 2005).

23. Similarly, Attorney General Cuccinelli has stated that homosexual acts are “intrinsically wrong” and “don’t comport with natural law”; and that homosexual behavior “is not healthy to an individual and in aggregate is not healthy to society.” Lustig Decl. Ex. G (The Virginia Pilot, Steve Shannon for Attorney General, Oct. 26, 2009); Ex. H (Huffington Post, Ken Cuccinelli Loses Petition to Uphold Anti-Sodomy Law, Apr. 10, 2013).

Remember, the supposed purpose of the Marshall-Newman Amended as represented in pleadings in Bostic was to protect traditional marriage and two parent parenting.  Yet we see statements that gays are unhealthy, a danger, that being gay is  life shortening, and other batshitery.  But Marshall's anti-gay animus extends far beyond alleged desires to protect "traditional marriage."  Joe Jervis has a partial list of Marshall's always sething animus towards gays:

Last week Marshall filed an amendment that would grant Virginia state legislators the right to claiming standing in marriage lawsuits. In September 2013, Marshall petitioned the US Supreme Court to overturn Virginia's legalization of sodomy. In May 2012, Marshall attempted to block the appointment of an openly gay state judge because the nominee has "an illegal husband." In 2011 Del. Bob Marshall claimed it is a felony for a state office to fly the rainbow flag. Marshall has also called on Virginia to issue its own currency, and has claimed that God punishes women who have abortions by giving them deformed children. After the DADT repeal bill passed, Marshall tried to have gays banned from the Virginia National Guard.

Equality Loudoun has a further compilation of Marshall's anti-gay animus here.  If a court wants evidence that anti-gay animus prompted the passage of the Marshall-Newman Amendment, it need look no further than Bob Marshall.

this man is Proof positive the GOP is FULL of Mental Midgets, Bigots,Haters, and just plain fools....what a pathetic sad man.....