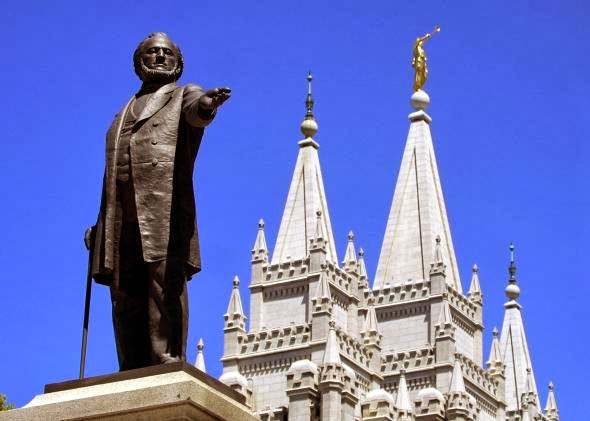 Just as many of the supposed scholars of the Southern Baptist Convention are struggling to get around the inconvenient truth that the human genome project has proven that Adam and Eve never existed as historical individuals (and that, there fore the Fall as described in the Bible did not occur), so to is the Mormon Church struggling with the truth revealed by DNA studies which indicate that the indigenous people of the Americas are the descendants of Hebrews who left Jerusalem around 600 BCE.  Once again we are seeing that knowledge and science are religion's biggest enemies because they destroy the myths on which religious dogma is based.  A piece in Religion Dispatches looks at the Mormon Church's dilema.  Here are excerpts:

Last week The Church of Jesus Christ of Latter-day Saints posted yet another undated, unsigned document on its official website, this one on the topic of “Book of Mormon and DNA Studies.” The essay addresses issues raised by the fact that there is little to no DNA evidence supporting the Mormon claim that the indigenous people of the Americas are the descendants of Hebrews who left Jerusalem around 600 BCE. This belief was so ingrained that for a very long time, Mormons referred to Native Americans as “Lamanites,” a name that also refers to a people in the Book of Mormon.

I’ve seen discussions arguing that it’s a tacit endorsement of evolution, and also, because it discusses events believed to have happened 10,000 years ago, a tacit repudiation of the Fall and the Flood and other events that supposedly occurred less than 10,000 years ago.

But let’s leave all that aside and instead talk about the nature and ramifications of evidence.

The Church begins by stating that “the primary purpose of the Book of Mormon is more spiritual than historical,” which is true of many religious texts. However, Joseph Smith and the church he founded have also always claimed that the Book of Mormon is a historical record of events that really, truly happened. One wonders why they would’ve insisted so strenuously on this point were it not somehow integral to the book’s importance and usefulness to its readers and authors.

[T]he problem isn’t one field of study, it’s a steady accumulation of evidence that undermines or contradicts the historical authenticity of the Book of Mormon—particularly given that Joseph Smith claimed, in a statement the church has made much use of, that “the Book of Mormon was the most correct of any book on earth, and the keystone of our religion, and a man would get nearer to God by abiding by its precepts, than by any other book.”

[T]he mere absence of distress while one reads the Book of Mormon is supposed to be an incontrovertible sign from God that what one is reading is “true.” In fact, it’s supposed to be so reliable that one is encouraged to extrapolate from it: if the words one reads in the Book of Mormon are true, then the entire volume must be true; and Joseph Smith must have been a genuine prophet of God in order to produce it; and the church Joseph Smith created must be, as it claims, “the one and only true and living church on the face of the earth;” and its current leaders must all be, as they claim, appointed by God to lead his church.

[I]t’s not merely DNA studies that “cannot be used decisively to either affirm or reject the historical authenticity of the Book of Mormon.” It’s also a feeling as one reads the Book of Mormon of peace, or warmth and arousal in one’s chest. These things are certainly evidence of something—that the text you’re reading resonates with you on some deep level, for instance—but they’re certainly not proof that it’s logically or spiritually sound to accept all the truth claims of the organization that told you said text might make you feel either peaceful or emotionally aroused.


It then asserts that “DNA studies cannot be used decisively to either affirm or reject the historical authenticity of the Book of Mormon.”