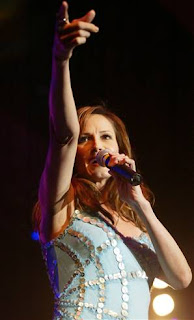 The juxtaposition between the headlines about Chely Wright (pictured at right) coming out voluntarily and the involuntary outing of anti-gay Family Research Council co-founder - and confidant of James Dobson - George Rekers (pictured below with his rentboy, "Lucien") could not be greater. Wright has focused on telling the truth and living her life authentically and with integrity while Rekes has lied, done incalculable harm to LGBT individuals and disingenuously tried to cover up the fact that he was caught red handed if you will with a male prostitute. I have always supported the outing of anti-gay closet cases, particularly because of their hypocrisy. Nonetheless, some have suggested that the LGBT community should show some compassion toward Rekes. Not in my view which mirrors that of my fellow Bilerico blogger friend Waymon Hudson. First, some highlights from MSNBC on Chely Wright's classy and dignified "coming out." Here are some highlights: 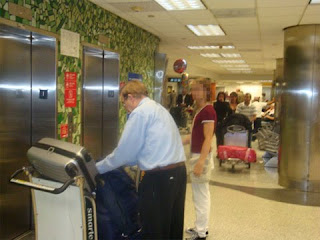 *
Now, 15 years into a chart-topping career, Wright has stepped forward and become the first mainstream country music star to acknowledge their homosexuality. The pretty 39-year-old revealed her secret in print to People magazine, and on the air on TODAY Wednesday, in an interview that coincided with the release of her autobiography, “My Life.”
*
“I lied, and I knew I had gone from not talking about it to ‘Now I’m a liar.’ ” It led to a harrowing crisis of conscience for Wright, who told Morales she hit rock bottom months after telling Rich she wasn’t gay.
*
“I had a 9 millimeter gun in my mouth,” she said. “I was taking inventory of my life and I realized I had pieces that I just couldn’t get to intersect. I was living a secret life and I was very much a country music celebrity, and I saw no way to get those to coexist. “I gave up hope and I was ready to take my own life.” . . . I stopped praying for what I always prayed for, which was help me figure out a way to still have my career.
*
“I changed my prayer, and my prayer was, ‘God, give me a moment’s peace.’ I got up off my knees and got my moment’s peace. I didn’t hear God’s voice, I didn’t see a guy in a robe, but I heard God say what he’d been whispering in my ears all along: ‘I expect one thing of you, and that is to tell the truth.’ ”
*
Wright then began putting pen to paper to tell her story, and after three reflective years, she finished her autobiography. The book’s release Tuesday coincided with a new CD, “Lifted Off the Ground.” Only time will tell whether her fans will embrace Wright’s honesty, or if she will suffer a backlash. But Wright still couldn’t hide her enthusiasm in finally being honest with herself. “It feels incredible,” she told Morales.
*
In contrast to Wright, Rekes has come up with shifting excuses for his 10 trip to Europe with "Lucien." Ranging from claiming he "hired" Lucien because he could not carry his luggage due to recent surgery, to claiming he was "ministering" to Lucien, the storyline borders on the ridiculous. Here are some highlights from Waymon's thoughts that sum up why Rekes deserves no compassion:
*
To be honest, I have a huge problem feeling any compassion for Rekers. His life has been devoted to hatred and actively blocking rights for LGBT people. His anti-gay and ex-gay "research" have harmed all of us in courts and in the public debate on LGBT rights. I have a hard time not reveling in the fall of his influence and standing in the professional anti-gay machine that he helped create.
*
The personal impact of Rekers on my own life as a foster parent here in Florida also makes compassion difficult. Rekers was one of only two witnesses hired by Attorney General Bill McCollum to defend Florida's anti-gay adoption ban in an effort to reverse a Miami judge who ruled Florida's adoption ban unconstitutional.
*
McCollum paid Rekers $87,000 for testimony that called gay people mentally unstable and advised that the ban should be expanded to include Native Americans because, Rekers claimed, they are also at much higher risk of mental illness and substance abuse. That's the man we are dealing with.
*
Personally, I am overjoyed that his hypocrisy will neuter his ability to make such arguments in a court of law ever again and could strengthen cases he has testified in as they move forward. I want him unable to cause further harm to me, my family, or my community ever again. . . . I would reserve my compassion for people like Ricky Martin, who struggled with internalized and societal pressure yet never did active harm to our community before coming out or being outed.
*
People like George Rekers, Larry Craig, and Roy Ashburn aren't being pilloried for being gay or just being outed. They are being shown as hypocrites and liars, which is the damaging part that well deserves the celebration and derision of the LGBT community and society as a whole.
*
Kudos to Waymon who once again has stated the case for outing and pillorying people like Rekes for the evil that they have done to the larger LGBT community. But for people like Rekes, the Chely Wrights of the world would not feel at times that suicide is their only way out of an existence they did nothing to bring upon themselves.