Arizona Is Not the Real Problem 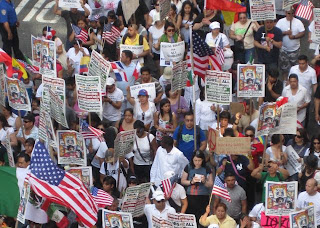 In the wake of protests attended by thousands in different parts of the country, Frank Rich has an op-ed piece in the New York Times that focuses on the dark underside of the movement behind Arizona's draconian - and likely unconstitutional - anti-immigrant law. Yes, there is a true need for immigration law reform, but the driving force behind Arizona's GOP inspired legislation is racial bigotry and a hatred for "the other." It is the same mind set Sarah Palin sought to tap into back during the the last presidential campaign. Rather than accept change and change with the times, the nativists and racists want to expel those who look different than themselves. Even in cases where these alleged "foreigners" are natural born U.S. citizens. It is a mindset that thankfully, I cannot grasp or understand. I simply do not understand how people can view others as somehow something less than fully human, but that is the mentality of these "true Americans.: Here are some column highlights:
*
DON’T blame it all on Arizona. The Grand Canyon State simply happened to be in the right place at the right time to tilt over to the dark side. Its hysteria is but another symptom of a political virus that can’t be quarantined and whose cure is as yet unknown.
*
The more you examine the law’s provisions and proponents, the more you realize that it’s the latest and (so far) most vicious battle in a far broader movement that is not just about illegal immigrants — and that is steadily increasing its annexation of one of America’s two major political parties.
*
To be angry about illegal immigration is hardly tantamount to being a bigot. But the Arizona law expressing that anger is bigoted, and in a very particular way. The law dovetails seamlessly with the national “Take Back America” crusade that has attended the rise of Barack Obama and the accelerating demographic shift our first African-American president represents. The crowd that wants Latinos to show their papers if there’s a “reasonable suspicion” of illegality is often the same crowd still demanding that the president produce a document proving his own citizenship.
*
The legislators who voted for both it and the immigration law were exclusively Republicans, but what happened in the Arizona G.O.P. is not staying in Arizona. Officials in at least 10 other states are now teeing up their own new immigration legislation. They are doing so even in un-Arizonan places like Ohio, Missouri, Maryland and Nebraska, none of them on the Department of Homeland Security’s 2009 list of the 10 states that contain three-quarters of America’s illegal immigrant population.
*
Neither Mitch McConnell, John Boehner nor Eric Cantor dared say a word against Arizona’s law. . . . There are few profiles in courage among the leaders in this G.O.P. — only a lot of guys hiding under their desks. The one group of Republicans that has been forthright in criticizing the Arizona law is the Bush circle: . . . McKinnon and Rove know well that Latino-bashing will ultimately prove political suicide in a century when Hispanic Americans are well on their way to becoming the largest minority in the country and are already the swing voters in many critical states.
*
It’s harder and harder to cling to the conventional wisdom that the Tea Party is merely an element in the G.O.P., not the party’s controlling force — the tail that’s wagging the snarling dog. It’s also hard to maintain that the Tea Party’s nuttier elements are merely a fringe of a fringe. . . . The rage of 2010 is far more incendiary than anything that went down in 1988, and it will soon leap from illegal immigration to other issues in other states.
*
I suspect that others to be blamed for the white Christian right's loss of control of the country will sooner or later also include us gays who are "out to destroy marriage" and otherwise undermine civilization by our mere existence.
Posted by Michael-in-Norfolk at Sunday, May 02, 2010