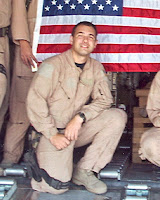 The series of letters to President Barack Obama from former members of the U. S. military calling for the immediate repeal of DADT continues. Today's letter is written by former SSgt. Anthony Loverde who was discharged under the misguided and religious based discriminatory policy known as Don't Ask, Don't Tell. One can only hope that the continued letters and direct action measures will at some point shame the unprincipled Obama and Congressional Democrats to do the right thing and end this horrid policy. More information on the letter campaign can be found here on the SLDN website. Now, more than 30 blogs are participating in the campaign. Here is SSgt. Loverde's letter to Barack Obama:
*
May 4, 2010
*
President Barack H. Obama
The White House
1600 Pennsylvania Avenue Northwest
Washington, DC 20500
*
Dear Mr. President,
*
They called me “vapor” -- As a little boy, I always had an interest in serving in the U.S. military. Both my grandfathers served in the Korean conflict, an uncle in Vietnam and I soon became the first of my generation to serve, followed by my brother and a few of my cousins.
*
After entering the Air Force in February of 2001, I eventually was promoted to Staff Sergeant. Although successful in my job as a Precision Measurement Equipment Laboratory (PMEL) technician, I was still coming to terms of being a gay man.
*
I struggled with my faith that told me it was a sin. I couldn‘t talk to the Chaplain Corps because I had read about gays being discharged after coming out to a chaplain. And so, I continued to internalize my struggle with accepting myself, my faith and how I must live under “don’t ask, don’t tell.”
*
As my separation date approached, many of my supervisors offered career-counseling. They all said the same thing: “Tony, you need to consider re-enlisting. You are the kind of Airman that the USAF needs to retain. You have a bright future in the Air Force and it would be a great loss to see you leave.” They often times would ask why I wanted to leave, and I always replied: “I don‘t like wearing hats.”
*
Eventually, I changed my mind and was able to better manage living under DADT. I applied for cross training into C-130 Loadmaster and was accepted. I figured the high ops-tempo; frequent deployments and lack of down time would make for a great environment to keep me so busy that I just wouldn‘t have time to be gay. I thought it was a brilliant plan.
*
As a distinguished graduate from Loadmaster training, I quickly established myself as a top-notch troop with the 37th Airlift Squadron at Ramstein Air Force Base in Germany. Within four months of my arrival, I had completed my upgrade training and was mission ready. I deployed to Ali Al Salem, Kuwait, in support of Operation Iraqi Freedom.
*
But deployment can take its toll. I couldn’t lie to my fellow troops -- my friends -- anymore. I delayed coming out as to not compromise our mission and waited until we returned to Germany. At first, I ended up avoiding them as much as possible. They nicknamed me “vapor” -- as soon as we hit the ground, I would disappear.
*
I didn‘t avoid them because I didn‘t like them, I avoided them because I respected them enough to not have to lie and burden them with my secret. When I arrived in Germany, I sent an email to my First Sergeant to tell him I wanted to speak with my commander about being gay and not wanting to abide by DADT any longer. My commander said I served honorably and they would be there to support me in my transition back to civilian life.
*
Each one of my past supervisors from the ranks of E7 to E9 wrote character reference letters that requested my retention. My commander and First Sergeant said my character, performance and honorable service was not at question…it was merely a legal matter.
*
Upon my discharge, I was hired by global contractor KBR to fill a technical position in Iraq and later in Bagram, Afghanistan. I was once again working with the same Airmen I had worked for on active duty, but this time openly gay. No one had a problem. I continue to work side by side with members of our military – each of them knowing me as a gay man -- and it has caused no impact on the mission. My contracting job for the Department of Defense now is the same job I performed when I was in uniform.
*
Mr. President, we need you to help repeal this law – this year -- so that my comrades continue to work in a force that retains the best and brightest based on performance rather than sexual orientation. Our men and women in the military deserve better. Listen to them, and, please, sir, do not turn your back on us.
*
Very Respectfully,
*
Former SSgt. Anthony Loverde
United States Air Force
*
Does it make any rational sense to continue to lose dedicated members of the military like Anthony Loverde simply so that the sensibilities and bigotry of religious extremists like Elaine Donnelly and other Christo-fascists can be appeased? I think not. And if Obama had any backbone and integrity, he'd move to end DADT NOW.
Posted by Michael-in-Norfolk at Tuesday, May 04, 2010