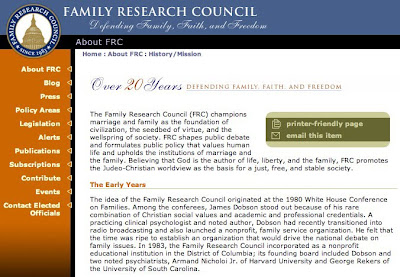 I have long viewed Family Research Council among a small group of utterly dishonest and untruthful anti-gay organizations. Lies and disinformation are the norm and the bombshell of George Rekers being caught with a 20 year old rent boy has seen FRC resort to its usual tactics: lie and issue disingenuous statements that its spokesmen know are false. Trying to conduct damage control FRC released a statement on the Rekers scandal to Talking Points Memo. Even though Tony Perkins claims little knowledge of Rekers, a 2008 screen shot of FRC's webpage via Towleroad shows that Perkins knows all about Rekers. Here are highlights from the FRC statement from TPM:
*
The Family Research Council sends over a statement on George Rekers, a co-founder of the group and leader of the ex-gay movement who was caught hiring a male escort. The council's president, Tony Perkins, denies his group has had any contact with Rekers over the past decade.
*
In the past 24 hours FRC has received calls regarding Dr. George Rekers and his connection with the Family Research Council. After reviewing the historical records we did verify that Dr. Rekers was a member of the original Family Research Council board prior to its merger with Focus on the Family in 1987.
*
Reports have been circulating regarding Dr. Rekers relationship with a male prostitute. FRC has had no contact with Dr. Rekers or knowledge of his activities in over a decade so FRC can provide no further insight into these allegations.
*
While we are extremely disappointed when any Christian leader engages in the very activities that they "preach" against, it is not surprising. The Scriptures clearly teach the fallen nature of all people.*
*
Believe that story? If so, I have a bridge I want to sell to you.
Posted by Michael-in-Norfolk at Thursday, May 06, 2010