New Study: Gay Couples as Fit to Adopt as Heterosexuals 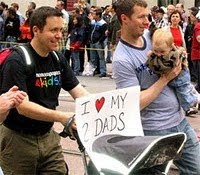 A new study throws ice water on the mantra of Christianists who seek to block same sex couples from adopting or acting as foster parents (e.g., people like George Rekes who served as Christianist interests in the Florida lawsuits - that is when he wasn't claiming gays can "change" their sexual orientation at NARTH). The study that examined 1,400 couples found that the sexual orientation of adoptive parents does not have an impact on the emotional development of their children. Once again discrimination based on religious dogma is shown not to comport with scientific fact. What a surprise - not! Here are some highlights from the Vancouver Sun:
*
"We found that sexual orientation of the adoptive parents was not a significant predictor of emotional problems," Paige Averett, an assistant professor of social work at East Carolina University, said in a statement. "We did find, however, that age and pre-adoptive sexual abuse were," she added.
*
Averett, Blace Nalavany, also of East Carolina University, and Scott Ryan, dean of the University of Texas School of Social Work, questioned nearly 1,400 couples in the United States, including 155 gay and lesbian parents.
*
The researchers said the findings, which are reported in the journal Adoption Quarterly, are important because it compared gay and lesbian and heterosexual couples. "There are implications for social work educators, adoption professionals, and policy makers in this and other recent studies," said Averett.
*
"We must pay attention to the data indicating that gay and lesbian parents are as fit as heterosexual parents to adopt," Averett added, "because at least 130,000 children are depending on us to act as informed advocates on their behalf."
Posted by Michael-in-Norfolk at Wednesday, May 05, 2010