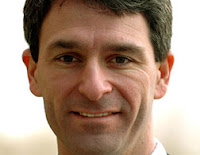 Both Slate and Blue Virginia have pieces that look at the danger that Ken Kookinelli's lawsuit and other actions against science pose for the Commonwealth of Virginia, and not just in terms of wasting money. The Blue Virginia piece calls the "Cooch" Virginia's Lysenko. For those not up on their Soviet history, Lysenko (pictured below) was Josef Stalin's puppet who manipulated alleged science to fit Stalin's insane views on the Soviet system's "New Man" and other areas where Stalin demanded that science be made to fit his megalomaniac agenda. In my personal opinion, Kookinelli is mentally disturbed (not to mention a possible closet case) and will try to force as many people as possible to embrace his untethered views. Nothing upsets the unhinged more than having objective reality and scientific truths challenge their fragile mental construct of an artificial reality. First, some highlights from Slate:

[W]hen Cuccinelli tried to put Virtus [on the Virginia great seal] in a burqa this week, the darling of the Tea Party movement explained without irony: "Just because we've always done something a certain way doesn't mean we always have to continue doing it that way." Seriously?
*
The problem with Breastgate was that it distracted from Cuccinelli's other efforts to press the legal machinery of the commonwealth into the service of his own agenda. Between his thwarted attempts to rescind anti-discrimination policies for gays and lesbians at Virginia universities, his one-man lawsuit against Obamacare, his recent approval of a new state policy allowing sectarian prayer by state police chaplains at public events, and his lawsuit suit against the EPA for attempting to regulate greenhouse gases, Ken Cuccinelli has become the Where's Waldo of Fox News stories. But his latest attack—against the University of Virginia's climate science researchers—is more troubling than his assault on bare-breasted Romans.
*
As Courtney Stuart first reported last week in Charlottesville's The Hook, Cuccinelli's office quietly filed a civil investigative demand (or CID, which is basically a subpoena) with the University of Virginia on April 23, giving the school 30 days to produce more than 10 years' worth of documents related to the state-funded research of a former faculty member, Michael Mann. . . . And who is this nefarious Michael Mann? A climate scientist who worked at UVA from 1999 to 2005 and now runs Penn State's Earth System Science Center. He became the climate-change deniers' whipping boy because of a 1999 paper he co-authored showing a dramatic uptick in surface temperatures after 1900.
*
But it's not just Mann on the hook here. "With a weapon like this in Cuccinelli's hands, any faculty member at a public university in Virginia has got to be thinking twice about doing politically controversial research or communicating with other scholars about it," says Rachel Levinson, senior counsel with the American Association of University Professors. UVA environmental science professor Howard Epstein, a former colleague of Mann's, puts it this way: "Who is going to want to be on our faculty when they realize Virginia is the state where the A.G. investigates climate scientists?" If researchers are really afraid to do cutting-edge research in Virginia, the state's flagship university is in enormous trouble.
*
It is the Blue Virginia piece that goes on to draw parallels between what Kookinelli is doing and the sinister "science" promoted by Josef Stalin through Lysenko. Neither Virginia nor the nation can afford to have scientific research curtailed or manipulated to fit the needs of religious extremists and flat earth types. The Bush/Cheney years illustrate all too well the damage that results. Cuccinelli is a menace and needs to be stop. Here are highlights from Blue Virginia:
*
Eighty years ago, Josef Stalin found a scientist he liked. This was bad news for the scientists who were not so popular with the Soviet leadership. . . . Lysenko's theories would have been laughed out of the lab had he not found a sponsor willing and able to apply the full coercive power of government to reward those who supported Lysenko and punish those who disagreed. Thousands of scientists suffered under Lysenko, losing their jobs and often being imprisoned.
*
It takes enormous courage to "speak truth to power" when you have a tyrannically-minded leader using power to threaten the truth. Which brings me to Ken Cuccinelli.
*
The state has an important role in science: to fund research and education, to use and promote science, to ensure it is freely conducted. It is not the role of the state to dictate, for political reasons, which scientific theories may be considered right or wrong.
*
When governments do take such a stance, and get away with it, it is a sign of a deep sickness in the body politic. Nothing is more important to democracy than the free and open pursuit of the truth. Politicians who don't respect or protect that pursuit represent the greatest danger a democracy can have. Because when you take away the ability of citizens to appeal to reason, truth and common sense, you open the door to arbitrary rule - which means that those in power can ultimately get away with anything.
*
Some may see it as a small thing that Attorney General Cuccinelli is demanding information from the University of Virginia about the work of climate scientist Michael Mann to determine if he was "defrauding" state taxpayers - that is, by publishing peer-reviewed scientific research that Mr. Cuccinelli and his donors in the fossil fuel industry (such as Massey Energy) found inconvenient.
*
This is no small thing. It is one of the most shocking acts I have witnessed in over three decades of studying, observing and participating in politics and government. Cuccinelli is crossing a line that democratic governments only cross at their peril. This action cannot stand - it must not stand.
*
The key to maintaining democracy is that when governments overreach, the people slap their hand. It's time for us to stand up and do so again - all hands on deck, people! This is serious.
Posted by Michael-in-Norfolk at Thursday, May 06, 2010