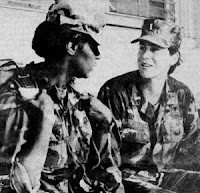 As noted previously, each day SLDN and a coalition of voices supporting repeal, are sharing an open letter to the President from a person impacted by the religious based discriminatory law known as Don't Ask, Don't Tell. Collectively, we are urging President Obama to grow a spine and include repeal in the Administration’s defense budget recommendations. In addition, we are demanding that he voice his support as we work to muster the 15 critical votes needed on the Senate Armed Services Committee to include repeal. The Defense Authorization bill represents the best legislative vehicle to bring repeal to the president’s desk. It also was the same vehicle used to pass DADT in 1993. Here is today's letter from former Army First Lieutenant Laura Slattery (pictured to the right in the photo), yet another honorable service member needlessly lost from the nation's military:
*
May 5, 2010
*
President Barack H. Obama
The White House
1600 Pennsylvania Avenue Northwest
Washington, DC 20500
*
Dear Mr. President,
*
I may be stating perhaps an obvious truism: Love is confusing. As a friend and, later in life, a chaplain, I have counseled many as they tried to navigate the toughest of love‘s questions: Is this the person I should marry? Is this infatuation or love, and how can I know the difference? Should I take the relationship to the next level? The first time I fell in love, it was just as confusing. I knew I was in love, but with a woman.
*
It was a severe test for me. I had never been in a same-sex relationship and didn‘t see myself as gay. Yet the fact remained — I was in love. Adding to the confusion, and the fear of the whole experience (love can be scary enough on its own!), was the fact that I had just graduated from West Point and was serving as a Second Lieutenant (2LT) at Schofield Barracks.
*
I had gone to West Point, to a large degree, because of the code of honor. Integrity has always been, of all the values, the one I hold most dear. My mother had graduated from UCLA and I remember clearly the day she told me how disappointed she was when she saw some of her students buying and selling papers they had written. At that moment I thought: Nope, that is not going to happen to me. I am going to a school that matches my desire and need for honesty and integrity.
*
So there I was – in love with a woman – and a brand new 2LT on a small island in the middle of the Pacific Ocean. The easiest thing for me to do -- and the course of action I tried -- was to encourage myself to run from love. I also considered confiding in others, but given the horror stories of investigations and removals from duty, I decided against it. The thought of the shame of being interrogated and kicked out of the Service for something I wasn‘t even sure I was (a lesbian!), was too much to bear. In the short three years that I was on active duty, I was Airborne and Air Assault (first female Distinguished Honor Graduate).
*
During the First Gulf War, I volunteered to go to Iraq. Due to the needs of the Army, however, I remained in the Pacific – working in the 25th Infantry Division. The values of physical work, integrity, service and team building made the Army an almost ideal place for me. I may have continued serving if I had felt more a part of the team. I was well-liked and had friends, but not being able to share the biggest struggle in my life (and the biggest joy) with my peers and military friends prevented me from really forming the kind of friendships that one needs to feel as an integral part of a team.
*
It’s the warmth and support of a team that is truly needed for real “unit cohesion” among the officer corps and with the troops. It is necessary to continue to risk life and limb for each other. In the end we risked everything not only for our country, but for our country personified in and by our buddies, members of that integral team. Not feeling that, I resigned my commission in September of 1991.
*
If I can be so bold, Mr. President: we need to help soldiers, and all people really, develop healthy understandings of what it is to be human, divorced from antiquated stereotypes about gender and gender roles. “Macho” has no place in the modern professional Army; put downs and negative comparisons to the feminine are also hurtful to the Esprit de Corps of the Forces.
*
I know that you have based your Administration on creating a culture of respect for difference, of developing your version of “unit cohesion” based on the values of inclusion and diversity, not in spite of them. This is the direction that the military needs to go, and it can start by repealing DADT now.
*
Sincerely,
*
Former First Lieutenant Laura Slattery
United States Army
Posted by Michael-in-Norfolk at Wednesday, May 05, 2010