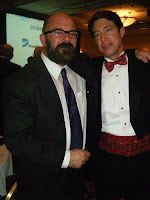 Last night's Commonwealth Dinner was a wonderful affair and the venue at the Marriott was far superior to that of the Richmond Convention Center where it has been for the past several years. The key note speaker, Andrew Sullivan, provided both a pep talk to Virginia LGBT citizens and reminded us that civil rights movements do experience many set backs - something far too familiar herein reactionary Virginia - before they ultimately prevail. One activist friend from Hampton Roads confided to me afterwards that Andrew's thoughtful and sensitive remarks brought her to tears at some points. He particularly reminded the audience that we ARE fully human and that we can never allow our enemies to take that realization from us. Surprisingly, the Richmond Times Dispatch has a story on Andrew's key note speech. Here are some highlights:
*
"My emphasis is on encouraging gay people to believe in themselves and to gain the self-confidence and self-belief that these political victories and defeats are not as important as creating a generation of people who believe in their own dignity," said Sullivan, the keynote speaker at last night's annual Equality Virginia Commonwealth Dinner. Equality Virginia is a statewide, nonpartisan advocacy organization seeking equality for gay, lesbian, bisexual and transgender Virginians.
*
"The civil-rights movements are built upon failures more than successes," he said. "It's the way you respond to failure, the dignity with which you react to losing that I think impresses the people whose minds are not made up."
*
He was dismayed by Virginia Attorney General Ken Cuccinelli telling state universities they had no legal authority to prohibit discrimination against gay students and employees. Gov. Bob McDonnell responded by declaring that he will not tolerate bias on the basis of sexual orientation, though he stopped short of adding sexual-orientation protection to Virginia's anti-discrimination law.
*
"I think it's a terrible shame," Sullivan said, "that Virginia is associated in many people's minds with the most draconian hostility toward gay people in the country."
*
Sullivan said he would like to "get past" the era of the gay-rights movement, but change and acceptance is a process that must be played out. He said "just a few things need to be done" to reach the point at which gays are allowed to live their lives like everyone else. Those things include a more widespread legal recognition of same-sex marriage. Sullivan said he is in the third year of his civil marriage to another man.
*
"I wrote the first piece on gay marriage in 1989 for the cover of The New Republic," he said. "We put a wedding cake on the cover with two guys on top of it. It was almost at that point a sort of thought experiment. "The idea that 20 years later I would be married and have my mother-in-law bugging me to go to Christmas, you know you've arrived," he said with a laugh.
*
Another determined and dignified individual that the boyfriend and I enjoyed talking with is Robyn Deane, a new voice for transgender activism who in her former life was the brother-in-law of Virginia Governor Bob McDonnell. Robyn is a joy and we feel privileged that we had an opportunity to get to know her. I suspect we will have future endeavors together as we work to drag Virginia fully into the 21st century. 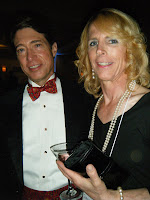 *
One of the ironies in Virginia is that each time the enemies of LGBT equality score what they see as a victory, it in reality galvanizes Virginia's LGBT community to a new of militancy and an increased refusal to live their lives so as to please the sensibilities of those who despise us. More and more of our circle of friends are living their lives openly with a mind set of "if you don't like/accept me, the loss is yours, not mine." That mind set and the increased acceptance one finds among the younger generation spell long term defeat of the Christianists and the powers of reaction not only in Virginia but in other currently non-progressive areas of the USA.
Posted by Michael-in-Norfolk at Sunday, May 02, 2010

Marriott??? A benefit at and presumably profiting the Mormon cult?

Actually, the Marriott hotels have been very supportive - the Marriott in Norfolk gave us many things at no charge when we did the Legends event last November and I believe the Marriott in Richmond did the same for the Commonwealth Dinner event.