Looking for Leadership on DADT 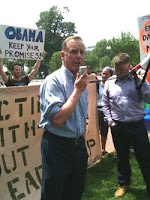 First it was Nancy Pelosi in a press release calling on Barack Obama to suspend discharges under DADT. Now it's former DNC chair Howard Dean joining protesters at the White House yesterday and calling for the repeal of DADT. Is Obama utterly deaf? Or is he still too busy pandering to his BFF Rick Warren and the Christo-fascist crowd? As for HRC, it appears that Dean has more courage than Joe Solmonese who would never think of doing anything that might impair his "access to power," not that such access has done a damn thing to move the LGBT equality movement forward in concrete terms. Polls have shown that even 56% of Republicans approve of the repeal of DADT, yet Obama and most Congressional Democrats remain sitting on their hands? One can only wonder why and also why the self-anointed gay rights organizations cannot seem to get the job done. Since plying nice has gotten us nowhere, I believe that it is time for more actions like the one that occurred yesterday at the White House. Here are highlights from Metro Weekly's take on the events:
*
From an appearance by former chairman of the Democratic National Committee Howard Dean to six civilians who chained themselves to the White House fence, pressure mounted on Sunday in response to what is perceived as slow movement by the Obama administration on repeal of the ''Don't Ask, Don't Tell'' law.
*
Dean told the crowd of more than 100 assembled in Lafayette Park on May 2 that the committee chairman running the DADT discussion in the Senate ''has the votes'' to pass a repeal in his committee this year.
*
On Saturday, the Servicemembers Legal Defense Network (SLDN) announced that its executive director, Aubrey Sarvis, would be speaking as well. As the event unfolded on Sunday, however, word spread that Dean would be speaking. Before he addressed the crowd, Dean told Metro Weekly he had not planned to attend the event but was in the area for a Democracy for America fundraiser and supported the cause.

''It's a cause I think is really important. I think equality under the law can't be abridged under any circumstances,'' said the former Vermont governor. ''Gay and lesbian Americans have given their lives for this country, and they should be able to say who they are proudly, and I think it will make the armed forces stronger, not weaker.'' Referring to Choi, Dean told the crowd, ''We can't afford to lose any talented people.''
*
Sarvis spoke of the recently released letter by Defense Secretary Robert Gates and Chairman of the Joint Chiefs of Staff Adm. Mike Mullen urging no legislative action on DADT repeal at this time – as well as the administration's response to it. Referring to the backdrop of the White House, Sarvis said, ''There was no profile in courage Friday night behind me. It was politics as usual.''
Posted by Michael-in-Norfolk at Monday, May 03, 2010