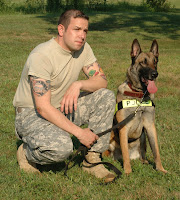 As I and many others have argued,we desperately need congressional action and most importantly presidential leadership at this critical point in the fight to repeal “Don’t Ask, Don’t Tell” (DADT). Sadly, other than pretty speeches, President Obama has been AWOL. As a result, every weekday morning as we approach the markup of the Defense Authorization bill in the Senate and House Armed Services Committees, SLDN and a coalition of bloggers, including myself, are voicing supporting repeal and sharing open letter to the President from individuals driven from the military by this discriminatory law that does nothing except codify religious based discrimination. Something illegal under the U.S. Constitution. Here is today's letter from former Staff Sergeant Anthony Moll, United States Army:
*
May 6, 2010
*
President Barack H. Obama
The White House
1600 Pennsylvania Avenue Northwest
Washington, DC 20500
*
Dear Mr. President,
*
My name is Anthony Moll and I am a bisexual veteran. I served for eight years under the discriminatory “Don’t Ask, Don’t Tell” law that has failed our nation. I left the service just 10 weeks ago, and I can now say: this is the time, Mr. President, to push ahead and end this law.
*
The Senate Armed Services Committee is just a couple weeks away from holding a key vote on including repeal in the Defense budget. The vote will be close. Please, do whatever you can.
*
I have been proud to serve my country since joining the Army shortly after the attacks on September 11, 2001. My proudest moment was raising my hand and volunteering to serve our country in its time of need. When I enlisted in 2002, I knew what DADT said, but nothing could prepare me for what it meant.
*
I had never been closeted about my sexual orientation so joining meant not only keeping quiet, but also being asked to lie to those whom already knew. While my leaders were instilling the values of honesty and integrity in me, the law in place was forcing me to do the opposite.
*
I knew that despite serving with distinction as a military police officer protecting fellow soldiers and their families from harm, I could face expulsion. During my service I was hand-picked as a Phoenix Raven, an Air Force program in which only a handful of soldiers are asked to participate.
*
While serving as a handler in the military’s working dog program, I worked with the Secret Service in detecting explosives – working to protect you. In 2008, I was recognized as my installation’s Non-Commissioned Officer of the Year and Joint Service Member of the Year. Despite this distinction, the “Don’t Ask, Don’t Tell” law treated me as a second-class citizen.
*
While I excelled at every turn, this law forced me to be dishonest with my peers, my friends and my community. Our nation’s heroes should not be forced to carry the burden of serving in silence when we need our troops keenly focused on their missions. In the meantime, I'm not sitting on the sidelines. I am now working at the Human Rights Campaign on its efforts to repeal DADT now. But advocacy alone won't change the status quo.
*
Mr. President, tell Congress to move on repeal. Please allow my brothers and sisters-in-arms to live up to the Army values of respect, honor and integrity. Don’t let another life be ruined by a failed policy that hurts our nation as well as our heroes.
*
Mr. President, lift the ban.
*
Respectfully,
*
Former Staff Sergeant Anthony Moll, United States Army
*
These letters reveal a parade of honorable service members. Does it make any sense whatsoever to lose their skills and abilities solely to satisfy the religious bigotry of nutcases like Elaine Donnelly? I think not - and it is time for Obama to do something NOW.
Posted by Michael-in-Norfolk at Thursday, May 06, 2010