Virginia Dodges an Environmental Bullet - At Least for Now 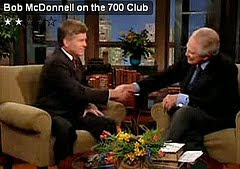 Virginia's Sarah Palin wanna be, Bob "Taliban Bob" McDonnell's rush for offshore drilling off the Virginia coast has hit a major obstacle: The Obama administration has suspended granting leases off the Virginia coast indefinitely. Sane and rational Virginians who value the state's beaches and coastal wetlands should be giving a shy of relief at least temporarily. Simple logic would dictate that no deep well drilling should occur until answers have been secured as to what happened at the BP well site in the Gulf of Mexico and what added safety requirements are needed to guarantee that no similar calamity can happen again. The New York Times has more details. Here are some highlights:
*
As the massive Gulf of Mexico oil spill raises questions about the safety of offshore drilling, the Interior Department has indefinitely suspended plans for an oil and gas lease sale off the Virginia coastline.
*
The department postponed the comment period on the plan indefinitely and canceled a series of public meetings that had been scheduled for this month on the proposed lease sale. The move comes as the department seeks answers from investigations into the explosion and sinking of the Deepwater Horizon rig and the ongoing leak of hundreds of thousands of gallons of oil every day into the Gulf.
*
Safety problems or other concerns raised in the reviews should be taken into account before moving forward with a new outer continental shelf (OCS) lease sale, the department said.
*
MMS also canceled a public meeting scheduled for May 12 in Norfolk, Va., to solicit public input on both Sale 220 and an analysis of the environmental effects of geological and geophysical exploration in the mid- and south Atlantic outer continental shelf. But that analysis will not be affected by the cancellation and will proceed as planned, MMS said.
*
As I noted in a prior blog post, the dangers of this exact type of accident has been recognized for at least a decade and in 2000 - before the Bush/Cheney regime took over - the MMS had issued a safety alert as to the need for back up systems. That alert can be found here. It is most unfortunate that Cheney and Haliburton apparently managed to subvert this wise requirement.
Posted by Michael-in-Norfolk at Thursday, May 06, 2010