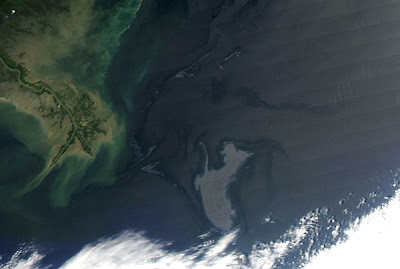 You have to wonder what's in the water that Gov. Bob McDonnell is drinking. Either that or assume that he must have drunk some of Ken Kookinelli's Kool-Aid. With the increasingly recognized possibility that the Gulf of Mexico oil spill may end up effecting Virginia, McDonnell continues to be obsessed with bringing offshore drilling to Virginia - putting at risk Virginia's seafood and tourism industry. Like it or not, the long term future demands that alternate energy sources - like offshore wind farms - be developed as opposed to trying to delay the inevitable. But then, the GOP isn't exactly known for new ideas and somehow expects different results from the same old approaches - a clear sign of insanity. (BTW, Rachel Maddow did a great job on McDonnell last night). Fouled beaches this summer could be financially catastrophic for the Outer Banks and Virginia Beach which depend on summer beach goers to keep their economy afloat. Here are some highlights from the Virginian Pilot that ought to be scaring the daylights out of rational Virginians:
*
Scientists are increasingly worried that spilled oil from the Gulf of Mexico may get sucked into the Gulf Stream and make its way up the Atlantic coast to Virginia and North Carolina, perhaps within two or three weeks. The same scientists say it is unlikely that any oil would reach shore and spoil beaches in either state, though offshore fishing and sea turtle migration off both coasts would likely suffer.
*
If the massive spill that resulted from an oil rig explosion off Louisiana “keeps going and they don’t stop it, we might start to see small tar balls on the edges of the Gulf Stream” off Virginia and North Carolina, said Larry Atkinson, an oceanographer at Old Dominion University in Norfolk. He said it would take unusual and sustained northerly winds to blow oil from the Gulf Stream onto beaches in Virginia and North Carolina, “but stranger things have happened.”
*
Atkinson is a member of the Mid-Atlantic Regional Ocean Observation System, a group of scientists and marine businessmen who are closely monitoring the Gulf spill and providing information to the Coast Guard and other potential responders to migrating oil.
*
Cape Hatteras on North Carolina’s Outer Banks is especially vulnerable to such an event, scientists say, given how it juts into the ocean so far and is only 10 to 15 miles from the Gulf Stream. In Virginia, this same offshore belt of moving water, rich in fish and marine mammals, is about 20 to 30 miles from beaches.
*
“We are concerned, definitely concerned,” said Harvey Seim, a marine science professor at the University of North Carolina in Chapel Hill. He and other scientists have been briefing emergency management coordinators along the Atlantic coast for several days, including those on the Outer Banks.
*
Environmental groups responded that potential impacts in the Mid-Atlantic from the Gulf spill are evidence that plans to drill for oil and natural gas at least 50 miles off the Virginia coast are too dangerous and should be scrapped. “The mere fact that we’re sitting here discussing possible effects in Virginia from a spill in the Gulf is astounding,” said Mike Tidwell, executive director of the Chesapeake Climate Action Network. “I mean, can you imagine the damage if such a spill, or even a smaller one, occurred off Virginia and not thousands of miles away?”
*
While some political leaders have backed a time-out from drilling in order to better understand what went wrong in the Gulf, McDonnell so far has remained behind a planned sale of oil and gas leases off Virginia in late 2011 or early 2012.
Posted by Michael-in-Norfolk at Thursday, May 06, 2010