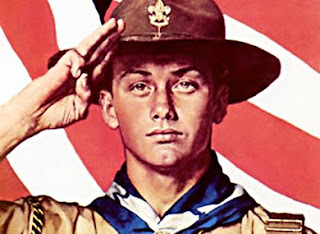 In an action that I believe is totally correct under the U.S. Constitution, the U. S. Supreme Court refused to hear the appeal of the Boy Scouts that sought to set aside lower court rulings upholding the City of San Diego's refusal to continue rent free benefits to the Boy Scouts due to their religious based discrimination against LGBT scouts and troop leaders. The lesson is pretty simple: if you want taxpayer supported benefits, you cannot discriminate against various groups of taxpayers. No doubt the professional Christian set will be wailing and gnashing their teeth, but nonetheless the decision is the correct one. Obviously, the Court's refusal to hear the appeal does not bode well for other situations where the Boy Scouts are trying to challenge the consequences of their own religious based discrimination. The irony is that some years back conservatives showed no mercy for artists seeking grants from the National Endowment for the Arts and blathered about there being no discrimination in a denial of grants since the artists' rights to free expression were not curtailed: they could do whatever they wanted, just don't seek taxpayer dollars to do it. Here are some highlights from Google News:
*
WASHINGTON — The Supreme Court on Monday decided to let stand a ruling saying the Boy Scouts cannot lease city-owned parkland in San Diego because the group is a religious organization. The high court refused to hear an appeal from San Diego-area Boy Scouts who have traditionally leased Balboa Park camp space.
*
U.S. District Judge Napoleon Jones Jr. ruled in 2003 that San Diego acted improperly when it leased 18 acres of camp space to the Scouts because the group is a religious organization. The judge said the lease violated federal law that prohibits the government promotion of religion. The Boy Scouts say they have no theology and only hold the position that children should "do duty to God" to become productive citizens.
*
The American Civil Liberties Union had sued San Diego and the Boy Scouts in August 2000 on behalf of a lesbian couple and an agnostic couple, each with scouting-age sons. They filed the lawsuit after the City Council voted to extend the group's 50-year lease for another 25 years.
*
The Boys Scouts have been the target of preferential treatment lawsuits since the U.S. Supreme Court ruled in June 2000 that the group has a constitutional right to exclude openly gay men from serving as troop leaders and because it compels members to swear an oath of duty to God.
*
The case is Boy Scouts v. Barnes-Wallace, 08-1222.
Posted by Michael-in-Norfolk at Monday, May 03, 2010

Yet again we see the real "special right" entitlement expecters.