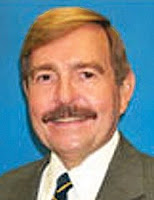 The self-destruction of Family Research Council co-founder and NARTH potentate George Rekers (pictured at left) fits a pattern that is all too familiar: an outwardly violently anti-gay homophobe who makes a career out of denigrating and attacking gays or pressing for legislation denying gays equality under the civil laws turns out to be what they profess to hate and oppose: gay, except a self-loathing closet case. Be it high profile faux ex-gays such as John Paulk or Michael Johnston or homophobes politicians like Ed Schrock, Larry Craig, and numerous others, the more vociferous they are in attacking gays, the more likely it is that they are in fact gay and transferring their own self-hatred to normal gays who have come to terms with their God-given sexual orientation. (Based on this pattern, a possible candid for future outing is Virginia's new Attorney General Ken Cuccinelli.) In fact, as Wayne Besen notes in a piece in the Falls Church News-Press, research has shown that there is indeed a correlation between virulent homophobia and being a closeted gay. Here's some highlights:
*
In 1986, Dr. Henry Adams conducted a study at University of Georgia that found the men who were most outspokenly homophobic were the ones most turned on by gay porn.
*
It is time that the mental health establishment and major universities invest ample resources to better understand the devastating affects of internalized homophobia and its societal consequences. I'm no expert, but I have observed enough anti-gay activists in person to believe that a sizable portion is gay. I also believe that suppressing their sexual orientation has possibly led, in some cases, to mental illness.
*
How else do you explain men like Rekers who are obsessed with homosexuality and have written thousands of pages denouncing homosexuality - and then turn around and hire young male prostitutes? It seems they can't stamp out their own desires, so they lash out at the entire LGBT community. The only reason such behavior likely isn't labeled a mental illness in need of treatment is because the mental health community probably fears a ferocious right wing backlash.
*
Adding to the irony of the delusional behavior of Rekers is that he still is trying to refuse to admit the truth about himself. Instead of admitting reality, he has made all kinds of ludicrous excuses, including hiring his rent boy to carry luggage or so that he could try to "convert him." Indeed, his excuses have been so lame and outlandish that Lucien, the rent boy has gone public and agreed to an interview with the Miami New Times and confirmed that Rekers was indeed gay. I respect Lucien's bravery and the fact that he has been willing to go public and put an end to Rekers' charade and serial lies. Here are some highlights from the latest Miami New Times story:
*
The male escort hired by anti-gay activist George Alan Rekers has told Miami New Times the Baptist minister is a homosexual who paid him to provide body rubs once a day in the nude, during their ten-day vacation in Europe. Rekers allegedly named his favorite maneuver the "long stroke" -- a complicated caress "across his penis, thigh... and his anus over the butt cheeks," as the escort puts it. "Rekers liked to be rubbed down there," he says.
*
In his first interview since New Times broke the story Tuesday, the 20-year-old escort, who prefers to go by the name Lucien, contradicts Rekers's contentions that he hired the escort to help carry his luggage and that he was trying to save the soul of a lost sinner.
*
"It's a situation where he's going against homosexuality when he is a homosexual," Lucien says. (When New Times called seeking comment, Rekers had turned his phone off. An email was not returned. He has termed the New Times article "slanderous" on his website.)
*
Lucien decided to speak out after a heart-to-heart with a friend, Michael, who alerted him to the grim realities of his client's anti-gay activities. Lucien, who had originally declined to speak about the trip, now says he can do little good by protecting his erstwhile, fundamentalist client.
*
Check back this afternoon for stories detailing the trip, the document Rekers asked Lucien to prepare in the hopes of preventing any future disclosures, and a character sketch of what we think is a brave kid -- one who dawdled for less than 24 hours before opting to tell an exceptionally painful story.
*
No doubt there will be some who trash Lucien for the line of work in which he engaged, but having been through outing Michael Johnston and Ed Schrock with Wayne Besen and Mike Rogers, respectively, it takes true courage and bravery to put himself out in the media as Lucien has done. Hopefully, his courage in confronting Rekers' lies and excuse will save young gays in the future from the poison that Rekers worked so hard to disseminate. Hopefully, other self-hating closeted gays will learn the lesson that their homophobia they use to disguise their true selves will eventually catch up with them. Are you listening Mr. Cuccinelli? You certainly behave like another Rekers.
Posted by Michael-in-Norfolk at Thursday, May 06, 2010

Oh, please don't compare [rentboy] with Wayne Besen and Michael Rogers; The latter two are two, obsessed, overzealous, arrogant, ignorant, hypocrites who only care about money and themselves.

I doubt highly that Wayne and Mike will be providing Lucien with grants and other necessities to protect him of that poison you write of.