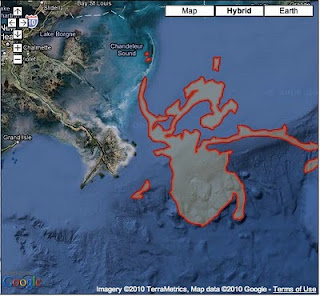 Having spent a couple of years as in-house counsel I have been holding off any verdict on the oil spill catastrophe in the Gulf of Mexico until now. The scenario continues to look worse and worse and it increasingly appears that an as yet unexplained policy change during the Bush/Cheney regime may ultimately explain why the shattered well failed to have a costly type of blow out preventer such as is required by many other nations for wells drilled in their waters. A New Republic story looks at this issue as to why the BP well did not have this - in retrospect - incredibly crucial piece of equipment. Here are some highlights:
*
Thanks to The Wall Street Journal’s terrific reporting last week, there are two important things we already know.
*
First, an oil-drilling procedure called cementing—which is supposed to prevent oil and natural gas from escaping by filling gaps between the outside of the well pipe and the inside of the hole bored into the ocean floor—has been identified as a leading cause of well blowouts. Indeed, a 2007 study by the Minerals Management Service (or MMS, the division of the Interior Department responsible for offshore drilling) found that this procedure was implicated in 18 out of 39 blowouts in the Gulf of Mexico over the 14 years it studied—more than any other factor. Cementing, which was handled by Halliburton, had just been completed prior to the recent explosion.
*
Second, the oil well now spewing large quantities of crude oil into the Gulf of Mexico lacked a remote-control acoustic shutoff switch used by rigs in Norway and Brazil as the last line of defense against underwater spills. There’s a story behind that. As the Journal reports, after a spill in 2000, the MMS issued a safety notice saying that such a back-up device is “an essential component of a deepwater drilling system.” The industry pushed back in 2001, citing alleged doubts about the capacity of this type of system to provide a reliable emergency backup. By 2003, government regulators decided that the matter needed more study after commissioning a report that offered another, more honest reason: “acoustic systems are not recommended because they tend to be very costly.” I guess that depends on what they’re compared to. The system costs about $500,000 per rig. BP is spending at least $5 million per day battling the spill, the well destroyed by the explosion is valued at $560 million, and estimated damages to fishing, tourism, and the environment already run into the billions.
*
There’s something else we know, something that suggests an explanation for this sequence of events. After the Bush administration took office, the MMS became a cesspool of corruption and conflicts of interest. In September 2008, Earl Devaney, Interior’s Inspector General, delivered a report to Secretary Dirk Kempthorne that has to be read to be believed. One section, headlined “A Culture of Ethical Failure,” documented the belief among numerous MMS staff that they were “exempt from the rules that govern all other employees of the Federal Government.” They adopted a “private sector approach to essentially everything they did.” This included “opting themselves out of the Ethics in Government Act.”
*
So here’s my question: what is responsible for MMS’s change of heart between 2000 and 2003 on the crucial issue of requiring a remote control switch for offshore rigs? What we do know is that unfettered oil drilling was to Dick Cheney’s domestic concerns what the invasion of Iraq was to his foreign policy—a core objective, implacably pursued regardless of the risks. Is there a connection between his infamous secret energy task force and the corrupt mindset that came to dominate a key program within MMS?
*
As for how bad will the spill get, the Washington Post has a VERY, VERY frightening story that, if the predictions are true, could mean disaster for much of the east coast of the USA. Yes, all the way up to the Virginia coast and beyond. If Bush and Cheney had a hand in allowing this well to be drilled without equipment that could have averted this disaster, in addition to being tried for war crimes, we have another indictment against them. Meanwhile, Virginia Gov. Bob McDonnell continues to favor drilling off the Virginia coast. Here are highlights:
*
[W]ith each day that the leaking oil well a mile below the surface remains uncapped, scientists and energy industry observers are imagining outcomes that range from bad to worse to worst, with some forecasting a calamity of historic proportions.
*
Three scientists in separate interviews Tuesday said the gulf's "loop current," a powerful conveyor belt that extends about 3,000 feet deep, will almost surely take the oil down through the eastern gulf to the Straits of Florida, a week-long trip, roughly. The oil would then hang a sharp left, riding the Florida Current past the Keys and north again, directly into the Gulf Stream, which could carry it within spitting distance of Palm Beach and up the East Coast to Cape Hatteras, N.C.
*
For the moment, the oil flowing from the blown-out well in what the industry calls Mississippi Canyon Block 252 is still many miles north of the loop current. . . . The oil so far has barely touched coastal islands and hasn't come ashore, but environmentalists are poised for a catastrophic impact that could last decades.
*
At a news conference Tuesday, Louisiana Gov. Bobby Jindal (R) said he had asked federal officials to look for ways to increase the Mississippi River's flow to keep the slick at bay. "Let's make no mistake about what's at stake here," he said. "This is our very way of life."
Posted by Michael-in-Norfolk at Wednesday, May 05, 2010