GOP Delegates Can Save the GOP From Trump 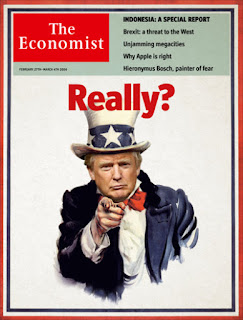 Although I am a former Republican activist, I now bear no love for the GOP and, in truth, believe that the party needs to die since I view it as being beyond saving.  The cancer of the Christofascists, white supremacists and know nothing elements that were cynically invited into the party has metastasized to a point where the death of the patient is the only thing that will stop the disease.  Yet, it would be refreshing to see that some shred of decency and morality is left in the GOP.  The best way for that to happen is a delegate uprising in Cleveland where Donald Trump is rejected.  The party leadership in the form of Paul Ryan, Mitch McConnell and others - one surprising exception being Lindsey Graham, a/k/a the Palmetto Queen - have sold their souls and truly care nothing for rank and file voters.  Indeed, Ryan's agenda continues to be one of a reverse Robin Hood policy that aims at the total degradation of working Americans.  To reach that goal, Ryan, et al, need to keep fanning the racial fears, homophobia and xenophobia of low information voters.  A piece in Salon appeals to GOP delegates to step up and dump Trump and perhaps begin the process of saving the soul of the GOP.  Here are highlights:

On July 18th, a demagogue named Donald Trump will begin the process of stealing the GOP out from under you. He’s a know-nothing maniac with an ideology that consists of ego-driven tribalism. Absolutely nothing about him is truly conservative.

Trump supports big government more than Hillary Clinton, if we’re to believe his economic aside about straight-up stealing money from wealthy Americans in what hecalls a “one-time tax.” Even Bernie Sanders would tell Trump he’s gone a step too far on this one.

What tricks low-information voters into believing that Donald Trump is a conservative can be condensed to a single word: authoritarianism. Republican leaders have been flirting with authoritarianism since Jerry Falwell uttered the words “Moral Majority.” There is a rabid Evangelical Christian subset of hardcore fundamentalists who want to use the government to impose the Christian equivalent of Sharia law upon the United States. Reasonable everyday Christians are terrified of them, and for good reason. But GOP leaders saw an opportunity and bought off this fundamentalist segment of society by completely bowing to their extremist social demands on issues like abortion, racial equality and LGBT rights during the 1980s. Many of the party officials never gave a hoot about these issues in reality. Their interests were with big business.

Republicans just knew that, so long as they played along, this low-information voting bloc would cling to them like they were the Second Coming of Jesus while they short-changed the brighter part of the electorate out of their hard-earned money in the interest of corporate greed.

What Republican leadership failed to understand was that this voting bloc wasn’t stupid enough to not notice that the GOP was selling them a bill of goods it had no plan to actually deliver. The Supreme Court, Executive Branch and Democratic Party were never going to allow the United States to roll backwards into the outright legal bigotry of the early 1900s. While Republican voters thought they were electing James Dobson, the GOP was really selling Joel Osteen to them in a Pat Robertson mask.

Republican voters started noticing the GOP’s ideological duplicity in earnest around the 2008 election, when the Tea Party movement arose. It claimed to be a group dedicated to lower taxes, but the truth was apparent. The Tea Party is where the woman-hating, LGBT-bashing racists plopped on their goofy hats and set about taking America back with their dear leader, Sarah Palin. Sen. John McCain sat helplessly in the corner, wondering what he had done while America fell in love with a black man and made some damn history.

After the GOP rolled over and played dead on marriage equality in 2015, the Tea Party bigots decided they’d had enough. Their plan this time is to completely destroy your party by electing an alleged billionaire with a distinctly warm hue to evict the Muslims, wall out the Mexicans, march the LGBTs from the bathrooms and jail those women who dare to get an abortion.

Does Donald Trump plan to actually do any of this? Of course not. He’s a grade-A con man on a bizarre branding exercise. But, what he will do is destroy what’s left of your party’s conservative foundation and place America in a position that could easily lead to economic and cultural disaster. The Economist ranks a Trump presidency as a higher economic risk than jihadi terrorism and the exit of the UK from the EU. Think about that for just a second.

Trump appears totally uninterested in the basics of law, governance or general knowledge. He makes up information as he goes and doesn’t care if it’s correct. All he needed: America’s dumbest voters to line up for him. (Or salute him like Hitler.) It worked. He’s about to be your nominee.

Now, you have the power to fix this. As party gatekeepers, you can come together to divorce yourself from the popular decision and vote your conscience. Speaker Paul Ryan is desperately hoping you’ll do this. Reasonable Democrats (like me) are hoping you’ll do this, despite the fact it puts our nominee at possibly greater risk. Most importantly, America needs you to do this, because Trumpism could permanently take over the GOP. . . .  a Trump-magnitude political destabilization of the GOP could throw our economy, culture and American families into chaos.

My hope is that, through voting your conscience, you will reshape the Republican Party into what it once was, which I admire. Your party is supposed to stand for freedom and smaller government. It’s intended to stop the Democrats from trying to stretch red tape from California to Virginia and wrap Americans in a suffocating bureaucratic bow. Heck, the Republican Party ended slavery. Your history is noble and represents the very best of this country. America needs you to revive that spirit and fight the greatest internal threat you’ve ever faced.

So, GOP delegates, go pull a Lincoln on that moron and banish him back to the Manhattan high rise from whence he crawled.