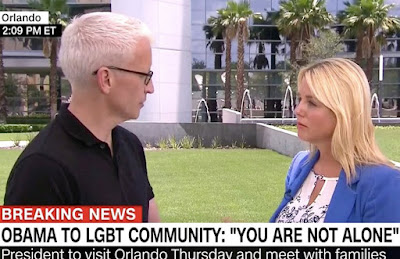 One of the positive things to come out of the Orlando tragedy is that a few anti-gay Republicans were exposed for the hypocrites and hate merchants that they are.  Perhaps the most delicious take down was that of Florida Attorney General Pam Bondi who has made a career out of opposing LGBT equality.  In the aftermath of the massacre at Pulse, Bondi was eagerly trying to maximize her photo opportunities and professed utterly false concern for the victims and their families and the LGBT community in general.  During an interview with Cooper on his national show, Bondi's anti-LGBT record was exposed and since then she's been having conniption fits that her hypocrisy and animus toward the LGBT community was spotlighted on national TV.   Gaystar News looks at Bondi's continued whining.  Here are highlights:

Pam Bondi tells Fox News the CNN anchor ‘basically mocked me’ during an interview this week about her efforts to help those impacted by the mass shooting inside of gay nightclub in Orlando that left 49 people dead.

Cooper called Bondi out for what he saw as hypocrisy because she fought against making same-sex marriage legal in her state writing that it would ‘induce public harm.’

‘I get it. He’s hurt,’ she said of the openly gay Cooper.  ‘He is a champion of the LGBT community. But you know, that’s a time for us to come together … Emotions are high. I saw later that he had cried when he was reading the names. let’s just focus on unity and love. He basically mocked me for saying that.’

Bondi added that she wanted to talk about some fundraising scams that had been popping up since the killings.

‘He just flipped on me,’ she said. ‘There’s a time and place for everything. If he wants to ask me about doing my job, defending the constitution, but to incite anger and hatred–was not the time nor the place in front of a hospital.’

Cooper defended his line of questioning on Thursday: ‘It’s my job to hold people accountable. And if on Sunday a politician is talking about love and embracing “Our LGBT community,” I don’t think it’s unfair to look at their record and see if they have actually ever spoken that way publicly before. Which I never heard her say.’

Cooper added that ‘there is irony’ to the fact that Bondi is now championing her effort to help the gay community, including attack survivors, with ‘the very right which allows gay spouses to bury their dead and loved ones’ which he points out, is “a right that would not exist if Ms. Bondi had had her way. I think it’s fair to ask her about that.’

In my book, Anderson is to be lauded and I wish more news anchors and reporters would expose hypocrites the way Bondi was taken down.  It was delicious!!
Posted by Michael-in-Norfolk at Sunday, June 19, 2016

"‘He just flipped on me,’ she said. ‘There’s a time and place for everything."

Yes, and Anderson Cooper picked it. It's remarkable how it is among the Republiscum sociopaths -- especially minions of the NRA -- there is NEVER a time and place for ANYTHING. God forbid that someone should bring up precursors to mass murder in the aftermath of mass murder. When and where would this and other pieces of trump consider to be the right time and place?