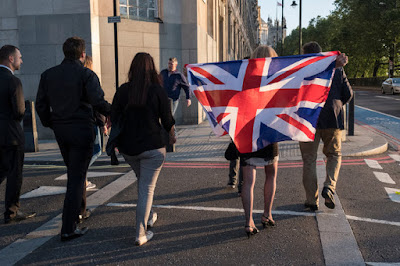 In a move that seems more motivated by bigotry and racism, not to mention nostalgia for a past that will never be again, a majority of voters in the United Kingdom voted for withdrawal from the European Union - despite agreement by virtually all economists that the move would significantly harm Britain's economy.  Like it or not, the days of the sun never setting on the British Empire are gone for ever, but why rely on logic and objective reality when one can satisfy one's racist bent and xenophobia.   As  piece in the Washington Post, those who voted for withdrawal in many ways mirror the know nothings and white supremacists rallying to Donald Trump.  Here are article highlights:

It may be pure coincidence that Donald Trump flew to Scotland on the day that British voters decided to leave the European Union. But in striking ways, the forces fueling Thursday’s historic referendum here were similar to those that have shaken U.S. politics to its core in the past year.

On both sides of the Atlantic, political establishments and the elites have found themselves on the defensive. Rising resentment over the fallout from globalization and the effects of the financial collapse of 2008, which has widened the gap between the rich and everyone else, has divided voters in Britain and the United States.

Added to that are emotional issues of national and cultural identity at a time of growing demographic diversity, highlighted in both countries by often-angry debates over immigration. Both Trump and those pushing for Britain to leave the European Union have found the immigration issue to be their most potent political weapon.

Trump’s slogan, “Make America Great Again,” could easily have been adapted to the messaging of those in the “leave” campaign across the pond. Here, that desire for a return to an earlier time — to make Britain great again — is expressed through the issue of control.

Those who have pushed for Britain to leave the E.U. want to reclaim a measure of sovereignty by wresting power from the bureaucrats in Brussels, the headquarters of the 28-member bloc. They feel about the E.U. bureaucracy as tea party Republicans do about the federal government.

Early Thursday, Steve Devereux, an economist and teacher, was passing by the polling place at London’s Methodist Central Hall, a short distance from Parliament. . . . . On balance, Devereux said he feared that rattling the establishment’s doors by voting to leave the E.U. would pose a great risk. But it is clear that the sense of disgust and disenfranchisement is deep and widespread.

Distrust with political establishments cannot be overstated, on either side of the Atlantic. During the debate here, Michael Gove, a Conservative Party lawmaker and a leading voice in the “leave” campaign, sought to discredit studies warning of the economic consequences of leaving. “People in this country have had enough of experts,” he said.

The choices in the two countries may be different, but what animates the sentiment behind the votes springs largely from the same set of grievances. Even the contours of the electorates are similar. Here, as in the United States, voters are polarized along recognizable lines: young vs. old; college-educated vs. non-college-educated; urban vs. small town and rural.

A SurveyMonkey online poll showed that voters younger than 45 favored the “remain” campaign, with the very youngest overwhelmingly in favor. Those 45 or older supported the “leave” campaign. Similarly, those with a college degree supported the “remain” campaign by a nearly 3-to-1 margin. Those without a degree favored the “leave” campaign, though by a narrower margin.

By better than 2 to 1, those here who cited immigration as their most important issue said they would back Britain’s exit. Those worried about the economy, poverty and inequality, or defense and foreign affairs, all backed remaining.

The SurveyMonkey poll found that people here who said they would support Trump for president if they could vote in the United States backed the “leave” campaign by a significant margin. Those for Clinton said they were voting to remain in the bloc.

It is sad to see that like America, Britain has a significant uneducated white trash element that can be duped into voting against its own financial best interest by appeals to racism and the fantasy of restoring the past.
Posted by Michael-in-Norfolk at Friday, June 24, 2016