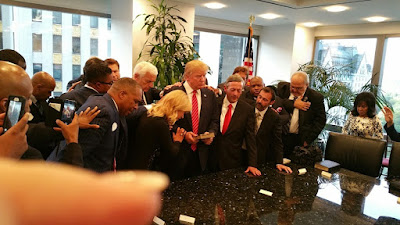 As I have noted previously, members of the LGBT community who may be contemplating voting for Donald Trump, are in my opinion, out of their minds.  As Exhibit A to support my analysis, today Trump met with a veritable who's who of LGBT hating Christofascists in an effort to win their support.  True to form, Trump made many promises today, including that he would (i) strike down IRS bans on tax-exempt religious entities from engaging in political activities and (ii) appoint ultra conservative justices to the U. S. Supreme Court.  Numerous news outlets look at Trump's self-prostitution to the haters.  First, these excerpts from The New Civil Rights Movement:

Facing a group of some 1000 anti-abortion activists, pastors, anti-LGBT activists, hate group heads, and other evangelical leaders, Donald Trump on Tuesday attempted to quell fears among the religious right that he might not be an authentic social conservative, and may not fully adhere to their values.

Trump made two promises to the evangelical leaders at Tuesday's New York City meeting. He will appoint Supreme Court justices who oppose abortion, The Washington Post reports, hinting he would want to overturn Roe v. Wade. And Trump promised the evangelicals, many of whom run religious non-profits, he will get rid of the Johnson Amendment, a six-decade old law that bans non-profits with a tax-exempt status, including churches, from directly engaging in partisan politics, such as endorsing or opposing political candidates.

Tony Perkins, President of anti-gay hate group Family Research Council, appeared supportive. "He gained a lot by coming here," he said. Possibly referring to Trump's history of philandering and divorce, Perkins added, "We’re all sinners. We all have messed up. We did not have a theological discussion today about the eternal security of one’s soul. We were talking about the present threat to America."

But there is more.  As the Washington Blade reports,  Trump has also set up anti-LGBT evangelical advisory board who has as it co-chair Michele Bachmann who runs a bogus "ex-gay" cure center with her closeted husband.  Here are highlights from the Washington Blade:

The 26 members of the board are a who’s who of individuals who’ve sought to undermine LGBT rights. Members were announced on the same day Trump was set to meet with evangelical leaders at Trump Tower in New York City. Bachmman is the first name on the list of members, which is in alphabetical order.

Joining Bachmann on Trump’s board are others with anti-LGBT views, including Ralph Reed, founder of the Faith & Freedom Coalition and James Dobson, founder of Focus on the Family. Also on the list is Harry Jackson, pastor of the Maryland-based Hope Christian Church who sought to block the legalization of same-sex marriage in D.C.

Another member is Robert Jeffries, senior pastor of the First Baptist Church of Dallas, who has a history of virulently anti-LGBT comments. Among them is making the dubious claim that “70 percent of the gay population” has HIV/AIDS and therefore gay people should be barred from the armed forces.

Trump announces the anti-LGBT advisory board less than a week after saying he’d be a better friend to the LGBT people as president than his Democratic rival Hillary Clinton. The Washington Blade has placed a request to comment in with the Trump campaign seeking for explanation on why affiliating with these anti-LGBT figures doesn’t undermine the pledge.

The prospects of Trump and evangelicals determining our future is nothing less than terrifying.