The Self-Centeredness of Christofascists 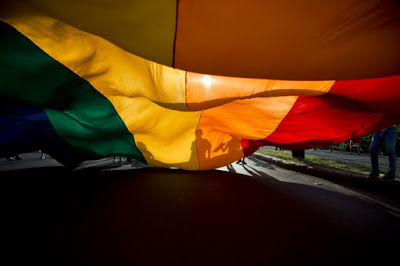 I often state that the most selfish and self-centered people you will ever meet are the Christofascists who whine incessantly about their piety and godliness even as they hate nearly everyone around them and seek to trample on the rights and sensibilities of others.  It is ALWAYS about them and blocking anything, no matter how trivial, that might suggest that there are views and beliefs other than there on.  In the aftermath of the Orlando massacre of LGBT Americans, the Hillsborough County government building flew a rainbow flag as a sign of respect for the victims and their families.  True to form, that simple gesture resulted in spittle fleck rants and claims that the mere presence of the flag created a "hostile work environment" in the minds of at least one self-absorbed Christofascist.  It truly is difficult to comprehend how disgusting and reprehensible these people are.  Yet some politicians still rush to kiss there asses and prostitute themselves to them.  The Tampa Bay Times has coverage of this outrageous story.  Here are highlights:

TAMPA -- A pride flag waving outside the Hillsborough County center was meant to be a sign of respect and remembrance for the victims of the shooting at an LGBT nightclub in Orlando.

But just a day after it was raised, Commissioner Stacy White said it may be offending Christian employees and questioned whether it should be taken down.

In an email sent to the the county human relations director Peggy Rowe on Thursday, White said he received an anonymous complaint from a county employee that the presence of the flag was “nearly unbearable” for her to pass on her way to work and created a "hostile work environment."

Calling the rainbow flag a “divisive, politically-charged symbol,” White asked Rowe if it could become an HR problem for the county. If it does, then White said he wanted a special meeting of the county commission to consider removing it.

Commissioners voted 5-1 on Wednesday to hang the flag for the rest of June, which is Pride Month, after 49 people were killed at Pulse Nightclub in Orlando on Sunday. The shooter, Omar Mateen, reportedly targeted the bar because it is a well-known LGBT hangout. It was the deadliest mass shooting in modern U.S. history.

White, a Republican who represents east Hillsborough County, was not present for the meeting. The flag was raised immediately after Wednesday’s meeting.

In addition to raising the pride flag, the commission voted to recognize June as LGBT pride month every year and hold a candlelight vigil each year on June 12 to remember the victims of the Orlando shooting.

While I don't advocate violence, it's hard to think that the Pulse shooter killed the wrong people. White and the cowardly anonymous employee personify the foul nature of the "godly folk" and their political whores in the GOP.
Posted by Michael-in-Norfolk at Sunday, June 19, 2016