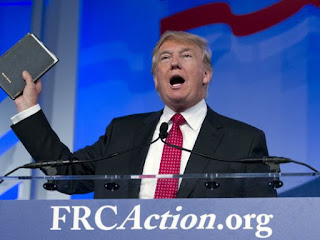 Yes, there is some good news on the 2016 campaign front which boils down to Donald Trumps refusal to date to set up his own team on the ground.  While his lack of a ground game may have worked with the base of support that he was courting during the GOP nomination process, many in the Republican Party are fearful that it will not work in the general election.   Better news yet is that Trumps approach could be a drag on down ticket GOP candidates.   Yes, by some fluke Trump's approach might work, but it ignores the usual need to get every possible voter out to the polls on election day.  A column in Talking Points Memo looks at this situation.  Here are highlights:

It's hard not to fixate on Donald Trump's string of galactic unforced errors on the campaign trail. But there's a whole different story playing out on the campaign mechanics front - and one that has Republicans rightly worried. According to this new story out from AP, the Trump campaign estimates that it currently has a nationwide field staff of 30 people. 30. This in a country with 50 states.

It is difficult to overstate just how many crazy notions are embedded in this package. No presidential campaign can really outsource its field operation to the party. That just means that the party has to build a whole additional field staff in addition to the one its already building (set aside not being able to control its strategy, quality of work etc.) That's not possible, or at least not possible to do well. The way this works in the modern campaign is that the presidential campaign has its field operation, the party has an additional field operation and they are coordinated together and in some ways integrated together in the fall for maximal impact.

Down ticket races are heavily, heavily dependent on these two massive field operations; they get pulled along with the wave of turnout these and other campaign committees coordinate.

Trump seems to have decided he's just not going to have one. Maybe he'll decide that's ridiculous and he wants to build on after all. But you can't just build a campaign operation overnight. And Trump is way, way behind.

It will have a substantial impact beyond the presidential contest itself. And that is assuming Trump gets into gear now and starts building. But that assumption itself seems highly, highly questionable.

I'm of the opinion that Trump never wanted to be president, he's simply looking for attention. Now he's setting himself up to lose. Sure that sounds crazy but we are talking about Donald Trump. Anything is possible.