Dustin Lance Black: It is Time to Disarm Hate 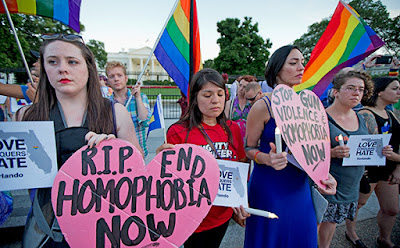 A week and a half after the traumatic massacre in Orlando, many of us are still finding ourselves ill at ease and perhaps more conscious of the hateful lies that our enemies among the religious extremist ranks disseminate.  Yes, the hate and lies and desperate clinging to writings of ignorant, uneducated herders of 2500+ years ago.  It's amazing that no one - or very few - would seek to have their healthcare governed by such archaic levels of knowledge and lack of education, yet millions of people allow their social beliefs to be governed by such ignorance (or in the case of Muslims, 7th century levels of knowledge).  In a thoughtful essay, Lance Black writes about the need to disarm religious based hate and, similarly, disarm would be terrorists.  Here are highlights from Lance Black's essay:

For the last six months I’ve been in Vancouver filming When We Rise, an ABC miniseries on the history of the LGBT rights movement. That’s what I was doing when I learned that 49 LGBT souls — the majority Latino — had been murdered in Orlando in a gay club, traditionally a place of refuge. That day, we were filming a scene re-creating the 2009 National Equality March on Washington. And so, between takes of Guy Pearce unfurling a massive banner that read “Equality Across America,” we tuned in to learn the names of the sons, daughters, allies, and parents who were ripped from our arms by gunfire and hate.

In so many ways, When We Rise is a testament to how far we’ve come, a tribute to those who have dedicated their lives to bringing us this close to safety and equality. Orlando served as a terrible reminder of just how much more we have left to do. The shock, the hurt, the anger, and the heartbreak left me winded, as were so many other Americans who love our country. It also made it clear to me that if we are ever to overcome homophobia, we must create better understanding of who LGBT people truly are by confronting the three worst culprits of LGBT misinformation: science, the state, and religion.

For too long, science mislabeled homosexuality a disorder, but in 1973 the American Psychiatric Association stopped classifying homosexuality as such. Now, with the support of nearly every medical association, many states are moving to ban the harmful and disproven treatment called “conversion therapy,” which attempts to turn young people straight or cisgender. But there are many other places in our country where kids are still subjected to this practice, which sends a dangerous message that there is something wrong with them, and often causes tremendous harm to those it claims to help.

As for the state, for a generation now the U.S. Supreme Court has ruled in favor of gay and lesbian people, overturning laws that criminalized our lives or relegated our love and families to second-class status. President Obama too has taken action to better protect LGBT people. But Congress has failed to pass the Equality Act, which would bring equality to LGBT people in their homes and workplaces nationwide. This failure sends a message that we are not worthy of equal respect or protection in the United States. Combined with the similar failure of local and state officials, it sends a false message of inferiority that gives license to treat LGBT the way the law still does — as subhuman. That is not leadership — that is blood on our elected leaders’ hands.

But it’s religion that continues to be the most active promoter and dangerous purveyor of homophobia, and by this I don’t mean just Muslims, but good old-fashioned American Christians as well. By clinging to the mantra of “Love the sinner but not the sin,” religion sends a message that LGBT people are not only lesser than, but morally corrupt. This judgment is not about love at all. It is hateful and deadly. Mere tolerance can no longer be the aim of religion. The time has come for true understanding and acceptance. It is time for organized religion to discard the outdated and misguided interpretations of God’s will that too often motivate violence and murder. To do otherwise makes our nation’s unaccepting religious leaders complicit in Orlando as well.

We must also act in more immediate ways that will protect not only LGBT people, but all citizens. My LGBT community has experienced the same kind of senseless violence that schoolchildren and their families have experienced, and that communities of color have suffered for generations. If there is one shining light in the darkness of our mourning, it is that we are not alone in this fight, and the time has come for LGBT people to join hands with others who have also suffered and demand gun control now.

Last year, when a religious extremist attacked people at Jerusalem’s Gay Pride parade, it was a tragic event, but because of Israel’s strict gun-control laws, the attacker used a knife instead of an assault rifle. He injured five people and killed one 16-year-old girl. It’s not that he had any less hatred than the Orlando shooter. It’s not that he didn’t try to murder many more. It’s that he couldn’t. He didn’t have the tools to do so. But in America, we give people with bloodlust and hate in their hearts the means to end dozens of lives per minute — and we allow the purchase of such heinous military-grade weapons to remain legal.

It is time for the LGBT community to join into such a coalition again [as Harvey Milk did] and wield our newfound political power in conjunction with groups already engaged in the fight against guns — groups such as the Brady Campaign, Everytown for Gun Safety, and Americans for Responsible Solutions — with parents from Sandy Hook, families from San Bernardino, and communities of color who have suffered similar tragedies for far too long.

It will, unfortunately, be a long road to eradicate the lies and hatred that inspire people to target our brothers and sisters, our children, parents, and our loved ones, but it must be traveled together. As Harvey Milk taught us long ago, in a “coalition of the us’s” we have the political power to disarm hatred. We owe it to the victims of Orlando, of Charleston, of Newtown — and far too many more — to do just that. It is time to disarm hate.