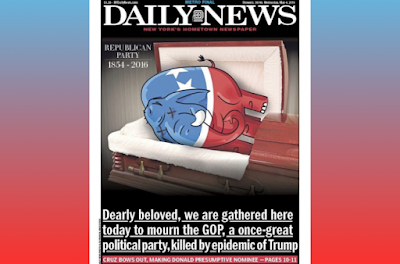 One hears constant blather about the American political system being broken.  Various reasons are cited, but the truth is that the gridlock is due largely to only one of the nation's two main political parties - the Republican Party.  Sadly, much of the mainstream media nonetheless insanely tries to maintain a myth of equivalency between the GOP and the Democrat Party.  As a piece in New York Magazine looks at the attempt by Jonathan Rauch in The Atlantic that tries to maintain the myth that Democrats are no different from Republicans.  The piece then tears apart that effort and shines blame where it belongs - on the GOP.  The piece also briefly notes how the GOP became so broken and resistant to any compromise even when in the best interests of the country.  I'd go a step further a shine a further light on the cause within the GOP, namely the rise of the Christofascist who not only prefer to base decisions on myths and legends rather than objective fact and who can never admit that they are in error.  Here are excerpts:

It’s plain to many people that American politics has gone badly off the rails if we have reached the point where a bigoted and hyperbolically unqualified reality-television star can win a major-party nomination. But what, exactly, has gone wrong?

One answer is that the presidential system is inherently unstable, because it pits the legislature against the executive. During the 20th century, the system worked because the ideology of the two parties overlapped heavily, but polarization has turned the mechanism designed by the Founders into a doomsday machine.

Another answer specifically blames the extremism of the Republican Party, which, by the nature of its uniquely extreme ideas about the role of government, is unable to share power in a rational way. (These explanations are not mutually exclusive, and I find each somewhat persuasive: The design of American government is vulnerable to collapse under the weight of a radical faction like the modern GOP.)

Jonathan Rauch’s Atlantic cover story, headlined “How American Politics Went Insane,” offers up a third answer. Rather than the presidential system, or the Republicans, Rauch instead blames the demise of what he calls the “informal constitution.” Rauch has some things right. Large numbers of Americans fail to understand the source of partisan conflict, find gridlock inexplicable, and retreat to a simplistic populism to make sense of the mess.

But Rauch also fails to adequately or correctly explain the causes of political dysfunction. The trouble with his theory becomes clear if you run through his examples of government dysfunction. “House Republicans barely managed to elect a speaker last year,” and then hard-liners revolted against the Speaker’s budget deal; members of Congress are worried about “being the next Eric Cantor,” the House leader who lost his primary to an upstart tea-partier; it’s “hard to raise the debt limit or pass a budget”; the Senate has refused to consider any nominee at all for the Supreme Court vacancy; annual appropriations bills often fail to pass; the government has shut down, and Congress has threatened not to lift the debt ceiling; a grand bargain on the long-term deficit failed in 2011; plus, of course, Trump, whose nomination is the most important factual premise of Rauch’s essay.

The links between these failures and the causes that Rauch identifies for them are tenuous at best. The link between the design failures of the presidential system itself and these failures is clear enough. The worse things go for the president, the better the chances for the opposition party to regain power. Cooperating would merely give the president bipartisan cover, making him more popular and benefiting his party as well. Republican leaders have openly acknowledged these incentives. In the Obama era, this has forced the Republican leadership to mount a scorched-earth opposition, demonizing the president as an alien socialist who threatens America’s way of life. That opposition has raged beyond their control, resulting in displays of anger like the shutdown, or birtherism, or the nomination of Trump that hamper rather than enable the party’s political interests.

The more serious problem with Rauch’s argument is this: Virtually every breakdown in governing he identifies is occurring primarily or exclusively within the Republican Party. Democrats have not been shutting down the government, holding the debt ceiling hostage, overthrowing their leaders in Congress, revolting against normal deal-making, or (for the most part) living in terror of primary challenges. The disconnect implies a fatal flaw in Rauch’s analysis. Since he identifies causes of illness that afflict both parties equally, while the symptoms have manifested in only one of them, what reason is there to trust his diagnosis?

Indeed, the more closely we look at the composition of the two parties, the more obvious it is that only one of them truly exhibits the tendencies he describes. Over the last decade, writers like me, Jacob Hacker and Paul Pierson, and Thomas Mann and Norman Ornstein have written about the growing asymmetry between the two parties.

The GOP, but not the Democratic Party, is fully identified with an ideological movement. The almost-all-white Republican Party is far more ethnically monolithic than the polyglot Democratic Party, and more ideologically monolithic, too — more than two-thirds of Republicans identify themselves as conservative, while fewer than half of Democrats call themselves “liberal.” Democratic voters rely on news sources that, whatever their unconscious bias, strive to follow principles of objectivity and nonpartisanship. Republican voters mostly trust Fox News and other party organs that merely amplify the party’s message.

A series of polls have all found that Democratic-leaning voters want their leaders to compromise, while Republican-leaning voters do not. Many Democrats feel frustrated with the system, but they want to make it work. Republicans do not feel this way at all. Rauch believes that restoring the kludgy legislative structures of the postwar era would bring back the same results those systems produced. But the 20th-century party system worked because the parties of that era were qualitatively different. Rauch’s proposal is merely one more in the latest of a series of well-intentioned but doomed plans to bring back a world that can never be restored.

A bit belated, but hopefully of interest anyhow.

IMHO, Rauch and many others concerned with the suicidal/homocidal proclivities of the Republiscum Party have been overthinking.

For just under 52 years - half a century - since the election of Ronald Rotten as governor of California, the explicit philosophy of the Republiscum Party has been that government -- certainly government to the extent that it attempts to constrain the powerful -- is evil and unnecessary. It is, in essence, an appeal to anarchy and the law of the jungle, using the power of law as feasible to empower the powerful and undercut the weak. When in office, attempt to weaken and/or sabotage the systems of government; when out of power, attempt to delegitimize government AND sabotage the systems of government. The government does not work NOT because of disputes between branches, but rather simply because one major constituency does not WANT it to work.

What has been happening is simply and sadly the logically illogical progression of shrinking government to the size that it can be drowned in the bathtub.