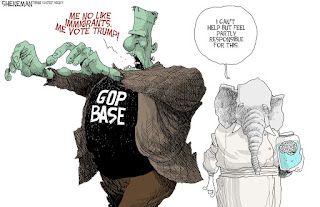 As the Donald Trump campaign continues to look about to go off the rails - Trump fired his campaign manager today - the unease and near hysteria in some Republican circles continues to grow.  Now, as the Washington Post reports, the "Dump Trump" effort reportedly now includes over 400 of the delegates for the upcoming GOP convention.  I have little pity for those who want to stage a coup at the convention since over the years they have fostered the atmosphere in which Trump has thrived.  Indeed, they made racism, homophobia and misogyny platforms of the party even though they used dog whistle messaging.  Trump has merely taken their message from out of the smoke screens.  Here are Post highlights on the new effort to stop the GOP's Frankenstein monster:

A campaign to stop Donald Trump from becoming the Republican presidential nominee has the support of nearly 400 delegates to the GOP’s convention next month, according to organizers, quickly transforming what began as an idea tossed around on social media into a force that could derail a national campaign.

While organizers concede their plan could worsen internal party strife, they believe they are responding to deep-rooted concerns among conservatives about Trump, who is suffering from declining poll numbers after weeks of missteps and embarrassing headlines.

“Short-term, yes, there’s going to be chaos,” said Kendal Unruh, a co-founder of the group, Free the Delegates. “Long-term this saves the party and we win the election. Everything has to go through birthing pains to birth something great. We’re going to go through the trauma of the birthing pains, but the reward will be worth it.”

Unruh, of Colorado, said her cause is winning support from “the non-rabble rousers. The rule-following, churchgoing grandmas who aren’t out protesting in the streets. This is the way they push back.”

The campaign’s growing support came amid a significant shake-up in Trump’s campaign. On Monday, he fired his campaign manager, Corey Lewandowski, one of his most loyal and vocal aides. The move was seen as an urgent attempt to ease GOP concerns over the campaign’s direction.

Thomson said at least 1,000 people participated in the call. Delegates who participated said they plan to spend this week wooing others to the cause.

In recent days Trump has called attempts to strip him of the party nomination “totally illegal” and a rebuke of the millions of people who voted for him. Over the weekend he accused former opponents Jeb Bush and Sen. Ted Cruz (Tex.) of trying to undermine his candidacy. Both men say they have nothing to do with the new movement.

On the call Sunday night, leaders of Free the Delegates repeatedly insisted they are not working on behalf of any of Trump’s former opponents. They also lashed out at Chairman Reince Priebus and other officials at the Republican National Committee who have dismissed the delegates’ efforts as silly and a media-driven myth.

But several delegates said they were buoyed by House Speaker Paul D. Ryan (R-Wis.), who told NBC’s “Meet the Press” on Sunday that “it is not my job to tell delegates what to do, what not to do, or to weigh in on things like that. They write the rules. They make their decisions.” Said Unruh: “Paul Ryan signed our permission slip.”

“My whole adult life I have been a loyal Republican. But this whole experience has really opened my eyes to what some folks I previously thought were nuts were warning us about,” Stinemetz said. “If you want to know how it’s possible for someone like Donald Trump to rise this far in our party, it’s because we have leaders like this.”