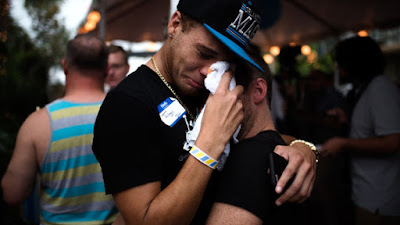 I will confess that I have a growing contempt for religion in general and Christian fundamentalists and conservative denominations in particular.  While claiming to be supporters of "family values," this in fact fundamentalist Christianity holds family relationships in low regard and rant that one must be willing to put god - their imaginary friend in the sky - ahead of spouses and children.   And stories like this one in the wake of the Orlando massacre at Pulse, the gay nightclub, show just how despicable these people truly are - and how self-centered they are.  Orlando Latino looks at the father of one of the victims who lost his life refusing to accept his son's body.  Indeed, other relatives had to step up and see to the young man's burial. Here are story highlights:

All the Pulse nightclub shooting victims’ bodies have been released to next of kin. Even the shooter’s body has left the Orange County Medical Examiner’s building off Michigan Avenue, according to information released this week.

“We effectively and efficiently completed the identification, notification and autopsy process within a 72-hour period – a monumental task,” according to an earlier statement by OCME, which worked with the Florida Emergency Mortuary Operations Response System to complete the gruesome task.
But it was touch and go for one particular shooting victim whose father didn’t want to claim the body. Because the son was gay. Because the father was ashamed. Finally and after much convincing, the body was released to Orlando-area relatives.
This young man shall remain anonymous so as not to further victimize the deceased, who was Puerto Rican. But Orlando Latino confirmed the information with several sources. The tale is part of the untold stories of the Latino victims of the Pulse nightclub massacre.
The pain of being Puerto Rican and gay is real. In the island’s macho culture (relative to the states), anti-gay bias is not subtle and has reached the highest levels of government.
Perhaps this why it took pop star Ricky Martin a while before declaring his sexual orientation. He is now the most famous gay Puerto Rican and no doubt his coming out in 2010 helped many others to do the same. In Puerto Rico, everybody loves Ricky Martin – he is famous, wealthy, good looking and more.

But nobody knew the Orlando shooting victim. No coming out on Oprah for him. And the victim’s family – or at least his father –didn’t accept the son’s sexual orientation, adding further insult to the sad and sensational circumstances of his death.

Note how the father was ashamed.  Not for his lost son, but rather it was all about him and "what will people think?"  These people are vile and churches that foster such bigotry deserve to be destroyed.  It's one of the reasons why I favor taxing churches just like every other business. Why should I and others be forced to indirectly subsidized such misogyny?  Moreover, if these nests of haters and vipers cannot survive without tax exempt status, then they deserve to wither and die.

Email ThisBlogThis!Share to TwitterShare to FacebookShare to Pinterest
Labels: Bible as a message of hate, families of gays, Orlando, Pulse, religion as an evil, self-centered Christofascists