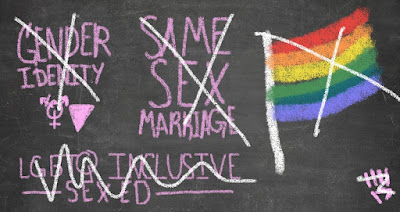 While Republicans and anti-gay religious extremists want to point to Islam as the real enemy of LGBT individuals, they totally ignore their own equally toxic contributions to keeping homophobia alive and well.  Indeed, as one of my children, the only difference between anti-gay Christians and anti-gay Muslims is that the majority of such Christians do not advocate killing us.  The merely want us to be invisible and/or open targets of their discrimination which, like anti-gay Muslims, they justify on the basis of their "deeply held religious beliefs."  A piece in Think Progress looks at how children in America are still taught to hate those who are LGBT despite the efforts of some to end religious based hatred.  Here are some excerpts:

Parents who object to seeing expressions of affection between two people of the same gender — expressions such as the one that reportedly offended the gunman who opened fire in a gay nightclub in Orlando last weekend — typically argue that’s inappropriate because they have no way to explain what’s happening to their children.

But when schools offer to do this work by developing curricula that would help children understand concepts related to gender and sexuality in a developmentally appropriate fashion, those some parents tend to get angry.

From sex ed classes to gender neutral bathrooms to gay pride, school administrators are often pressured by angry parents and conservative groups to roll back efforts at LGBT inclusion.

These type of controversies in the classroom could have a lasting impact on how young kids grow up to see LGBT people. The backlash not only deprives students of an education about LGBT issues; it also communicates to them that issues that are important to the LGBT community are not worth their consideration and at worst, are offensive.

Here are just a few examples of efforts across the country . . . that it’s okay to celebrate hate against LGBT people — or, at the very least, to ignore their existence:

Omar Currie, a third grade teacher in North Carolina, found himself amid a national controversy last year after he read a book to his elementary school class that featured gay characters. After Currie — who is openly gay — noticed a bullying incident against a child, he decided read the book King & King to his class to teach them more about same-sex couples. Parents railed against his decision to read the book, saying they should have been informed he would read the fairy tale to the class. Most of the people who were angry about the reading didn’t actually have kids in his class.

Sex and health education advocates have long pushed for classes that teach students how to use protection against pregnancy, how to protect themselves against STIs, and how to recognize whether their partner consents. But advocates have also begun to do a better job of recognizing that a comprehensive sex and health education also requires acknowledging LGBT students.

Right now, only 12 states ask teachers to mention sexual orientation during their sexual health discussion, according to the Guttmacher Institute. Four states require that when sexual orientation is discussed, only negative information should be shared.

An LGBT-inclusive sex education would challenge gender roles and acknowledge the existence of different kinds of families, including same-sex parents.

Accusing LGBT student clubs of having a “gay agenda”

LGBT students and their allies also face opposition when they attempt to introduce a Gay Straight Alliance to their schools. There have been various instances of schools and parents resisting GSAs and facing legal action from the ACLU as a result.

Most recently, after students at a Winchester, Tennessee high school started a GSA, they were accused by parents, community members, and anti-LGBT groups of pushing a “gay agenda.” During this outcry, the school board considered placing restrictions on all student organizations, such as requiring students to get permission from their parents to join. For some LGBT students and their allies, a request for parent permission would guarantee they couldn’t join the club, and could face consequences for even asking.

Despite clear communication from federal courts and the U.S. Department of Justice that transgender people have the right to use the bathroom corresponding with their gender, there is still fierce opposition from hate groups to gender-neutral bathrooms, which are often one stall bathrooms that don’t require two people to share them.

Despite all of the progress that has been made in securing marriage equality and in ongoing victories for trans students’ right to use the bathroom, administrators are still accusing of LGBT students of “disruption” and “lewdness” when they wear a T-shirt that expresses their sexual orientation or LGBT pride.

Earlier this year, one administrator told a California student that her “Nobody knows I’m a lesbian” T-shirt was an “open invitation to sex.” He also said the T-shirt could be “gang-related,” and that students aren’t allowed to wear shirts stating their “personal choices and beliefs.” Her school eventually reached a settlement with the ACLU and agreed to change its dress code.

Administrators often police student’s clothing until media attention adds pressure on the school or courts require them to back off.

The two boys, who went to French Settlement High School in Louisiana, were told they couldn’t come together as dates by the assistant principal. When a local television station inquired as to why the boys were prevented from attending together, the school said it would investigate the matter. The boys attended as each other’s date and wore matching tuxes.

It must be noted that it is ALWAYS the self-anointed "godly folk" who lead the charge to denigrate LGBT individuals.  Like Islam, in far to many ways Christianity is a religion of hate.  Blather about love of other is just disingenuous lip service.  It's really all about hate.
Posted by Michael-in-Norfolk at Monday, June 20, 2016