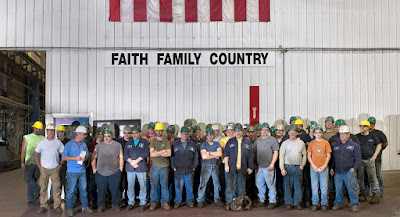 A piece in Politico Magazine looks at the appeal of Donald Trump to areas of the so-called "Rust Belt."  In particular, the piece looks at counties in Southwest Pennsylvania - the area where the husband's late parents were from and where we go for a family reunion each August.   The physical beauty of the area is remarkable, but socially and culturally, it is akin to Southwest Virginia, although perhaps not quite as shockingly backward.  Each year after visiting, I remark that if I had to live there permanently, taking razor blades to my wrists might look like an attractive option.  The region is prime Trump territory: almost all white, low education levels, reliance on dying industries, most notably coal,  Coming from an urban area, driving Mercedes Benz's with Hillary stickers, and being fashion conscious, the husband and I do not exactly blend, although the people are always pleasant - even if they probably thing we are from Mars.  As the article notes, Trump's boasting that he will "make America great again" resonates as does his proclamations that he "loves coal."  Never mind that  Trump has offered no specifics other than campaign sound bites as to how he would do any of what he promises or how he would counter the global decline in demand for coal as cleaner fuels become preferred. It is disheartening to see desperate people being played for fools by Herr Trump.  Here are some article excerpts:

Cambria County is 94 percent white—with low rates of college education and high rates of unemployment, hovering around seven percent. And most importantly for Trump, it’s a county that appears on the map, by different names, again and again across the American Rust Belt: Pennsylvania, Ohio, Michigan, Wisconsin and beyond. “He’s got to win these places,” Borick said, “and win big.” There is, Borick added, just one important question—for Trump, his campaign, and his quest for the White House.  “Are there enough Cambria Counties out there?”

It’s fair to say, over time, no one saw the changes coming. Between the 1850s and 1870s, Johnstown specifically, and Cambria County at large, became one of greatest industrial centers in the country. “And probably the world,” said Richard Burkert, the president of the Johnstown Area Heritage Association. Using natural deposits of iron ore, the Cambria Steel Co. and later Bethlehem Steel built an empire, of sorts, on the banks of the Conemaugh River. The steel jobs—some 18,000 of them by World War I—attracted immigrants from eastern and southern Europe. Coal mining jobs did, too. And the county, once just a few thousand people, exploded. By 1940, the population had peaked at around 213,000 people.

They also remember what happened next: how cheaper steel, produced by modern mills overseas in the post-World War II years, undercut the U.S. industry; and how Johnstown’s location, in those hills, connected by river and railroad, became less advantageous in the new era of interstate highways.  . . . . Since 1980, the county’s population has declined by a quarter.

“Us guys, it’s all Democrats here,” said Dave Kirsch, who lives in Cambria County and hauls coal for a living. But he sat out the 2012 election, after voting for Obama four years earlier. And he’ll do the same again this fall—unless, he said, he votes for Trump. “Everybody I’m talking to, they’re switching,” Kirsch said. “Trump says he’s for coal, and Hillary hates coal—and that’s a shame. Because, in my opinion, he’s a little nuts. She’s more qualified. But if she wants to take my job—then, no.”Rooney, the former state chairman of the state’s Democratic party, has heard similar sentiments all across the state. "There’s a general perception that Democrats—Barack Obama, in particular—have made it so the playing field is no longer level. Forget about the merits of the argument,” Rooney said. “The reality is, that narrative has set in. It has baked into the cake. And that makes the job of running for any office, as a Democrat, more difficult. That’s just the cold hard reality.”

“Ninety percent of my employees are Democrats,” he said. And by his estimation, about 70 percent of the workers were supporting Trump. . . . . I think you’ve got a group of frustrated voters. They’re working. They’re not getting handouts. They’re proud to be working, proud to be Americans, and they’re seeing this country go in the wrong direction.” . . . . Today, the Polaceks say, JWF Industries is nearly back to what it was generating before the recession struck.

“The problem is,” Bill Polacek said, “wages aren’t going up.” Costs for the company are high, especially health insurance. At least once in the last two years, they lost a lucrative contract overseas. “They moved it all down to Mexico,” John Polacek said. And so, this November, while the two brothers will be supporting many local Democrats—they’ve hung a giant sign outside their factory for a Democratic state senator—they’ll be voting for Trump.

[L]ike his blue-collar neighbors in Cambria County, Polacek wants to send a message.  “That’s probably what you’re seeing in this election,” he said. “People are fighting back. They’re saying: This is not complicated. You’ve got to do something. They’re tired of talk. And that’s the thing with these candidates: Hillary is talk; Trump is going to do something.”

“She’s [Hillary's] in big trouble in Cambria County. And a lot of other counties in southwest Pennsylvania,” said Rob Gleason, the state chairman of the Republican party, who was born and raised in Johnstown, and still lives in the county today. “She won’t win Washington, Green, or Fayette—these are all Democratic counties. She won’t win Beaver. She won’t win Allegheny”—where Pittsburgh is located. “You can just go down the list.”

But in the details, the threads of this argument begin to fray. For one thing, many voters who switched to the GOP in Pennsylvania this spring were Democrats in name only, having long voted Republican in presidential elections. Neither Polacek, Frear, or Joey Del could remember voting for a Democrat for president in any recent election. When they switched parties, the electoral outcome didn’t exactly change. Trump’s other problem is the math. “There just aren’t enough rural voters to put him over the top,” said Berwood Yost, director for the Center of Opinion Research at Franklin & Marshall College in Lancaster, Pa. Trump may indeed win Cambria County and others nearby. But Mitt Romney did, too, and he still lost the state to Obama, who won just 12 of the Pennsylvania’s 67 counties four years ago, six fewer than he won in 2008.
“In this state, a Republican has got to appeal to moderate Republicans and Republican voters in the southeast part of the state, who are mostly educated and mostly affluent,” Yost said. “And I don’t know that we’re seeing that sort of appeal from Trump.”

[S]ometimes Havener catches himself wishing for something else: for Trump to win.
“It would be devastating for the country, as far as I’m concerned,” he said. “I have no confidence in the man’s ethics. I have no confidence in the man’s diplomacy.” It’s why, in the end, he said, he’ll probably vote for Hillary. Still, the thought is there. Havener—and a lot of other Democrats in Cambria County—are thinking it. “There’s a little piece of me,” he said, “that wants to see Trump win. So I can say, ‘There you go—you got what you want now.’”

I don't mean to be condescending towards these people, but are they blind to the fact that Trump has offered ZERO specifics on what he would do to turn things around for these economic backwaters?  European demand for coal is down sharply.  The trend everywhere is for coal to be in less and less demand.  Trump can't waive a magic wand and change this reality or other economic forces that are hammering such regions.  And then there's another factor that these hurting individuals ignore - just like they do in Southwest Virginia - namely that given their backwardness on social issues, most industries that might be their salvation are likely to locate elsewhere.  21st century businesses and industries simply do not want to move to areas that still want to bring back the 1950's. 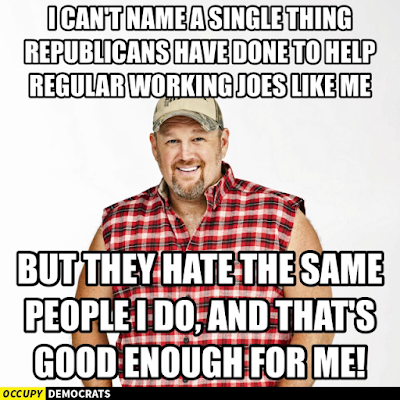