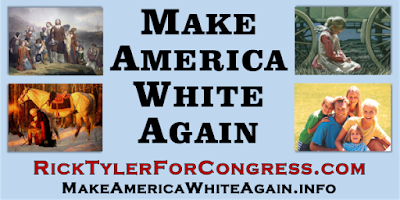 While in the past conservative politicians - at least until the rise of Donald Trump - tended to try to hide their blatant racism and use dog whistle messaging instead of putting it in full view.  Now, apparently emboldened by the response that Trump has received to his open message of racial based hatred, Rick Tyler, an independent candidate for Congress, is using billboards that display what the real "conservative" agenda is all about: restoring white privilege and putting those of differing racial groups "in their place."  Hand in glove with this agenda is an effort to push LGBT Americans back into the closet and make us simply invisible.  The images in this post are from Tyler's campaign web site and illustrate future billboards he wants to utilize in his campaign.  Here are excerpts from a Washington Post piece that look at Tyler's openly racist campaign ploys:

An independent candidate for Congress from Tennessee has been swept up in a wave of criticism for his campaign billboard vowing to "Make American White Again."

Rick Tyler, who is running for the 3rd Congressional District in the northeastern part of the state, said he put up the billboard alongside Highway 411 in Polk County to make a point that "the 'Leave It to Beaver,' 'Ozzie and Harriet,' 'Mayberry' America of old was vastly superior to what we are experiencing today."

In a Facebook post Wednesday night, Tyler wrote: "It was an America where doors were left unlocked, violent crime was a mere fraction of today's rate of occurrence, there were no car jackings, home invasions, Islamic Mosques or radical Jihadist sleeper cells."

But the billboard's message, a spin on Donald Trump's "Make America Great Again" slogan, has been widely derided as a display of bigotry and racism.

It was taken down Tuesday night, according to ABC affiliate WTVC.

Tyler, a 58-year-old self-described "entrepreneur, pastor and political candidate," ran as an independent in the 2014 Senate race, getting less than half a percentage point of the vote against Sen. Lamar Alexander (R-Tenn.).

"There's no room for this type of hateful display in our political discourse," Ryan Haynes, the Tennessee Republican Party chairman, told WRCB in a statement. "Racism should be rejected in all its heinous forms in the Third Congressional District and around the country." 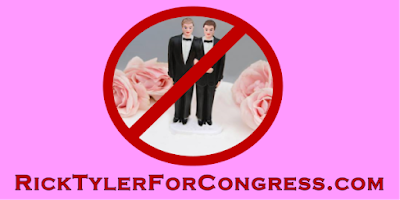 Note two things: (i) that Tyler identifies as a pastor, and (ii) the disingenuous condemnation by GOP party chair.  Tyler is merely saying openly what the GOP has been messaging for years.  Here's more from Tyler's campaign website:


The Make America White Again billboard advertisement will cut to the very core and marrow of what plagues us as a nation. As Anne Coulter so effectively elucidates in her book, Adios America, the overhaul of America’s immigration law in the 1960’s has placed us on an inevitable course of demise and destruction. Yes…the cunning globalist/Marxist social engineers have succeeded in destroying that great bulwark against statist tyranny…the white American super majority. Without its expedited restoration little hope remains for the nation as a whole. 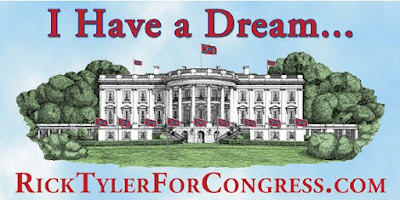