Radical Islamists and the American Far Right: Cousins of the Terrorist Kind 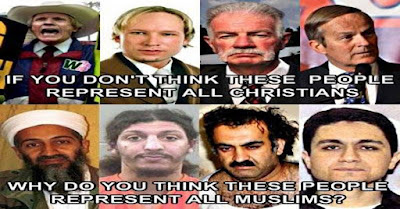 I have long maintained that both American right wing extremism and Islamic terrorism ultimately stem from largely the same source: religion.  Religion and modernity that threaten the simplistic house of cards fantasy worlds that both American born Christian extremists - be they KKK members or members of "patriot groups" - and fundamentalist Muslims live in.  To both groups, those who are different or who reject their beliefs are mortal enemies.  While the violence of Islamic extremists gets far more media coverage, the reality is that "real American" and "godly Christian" extremists pose a real risk to the general public and the LGBT community since religion labels us as "other" in the minds of the weak minded and mentally challenged.  An essay I came across looks at the parallels between the two extremist/would be terrorist groups.  Here are excerpts:

The gay community in Los Angeles, seemingly, got very lucky last weekend. Especially compared to their counterparts in Orlando. A 21-year-old Indiana man with a car full of guns and bomb-making chemicals was arrested by Santa Monica police Saturday. He told police he was going to the Los Angeles gay-pride parade later that day, but didn’t say what he had in mind.

In the car was an astonishing arsenal: a loaded AR-15 assault rifle rigged to allow 60 shots to be fired without pausing, two other loaded rifles, a stun gun, a hunting knife, loads of ammunition, and a trunkful of chemicals mixed and ready to explode as a car bomb. It soon emerged that the man – James Wesley Howell of Charlestown – had a history of violent confrontations and gun-related criminal charges, and was fleeing charges of child molestation when he left Indiana. The situation spoke ominously of an imminent domestic-terrorism attack – especially in light of the massacre that had occurred at the gay nightclub Pulse in Orlando late Saturday. However, since none of his arsenal was used and no violence committed, Howell was only charged with a variety of felonies related to bomb and gun possession. The parade went off without notable incident, though anti-gay protesters were present and visible. The outcome stood in stark contrast to what occurred that same evening at Pulse, . . . The Orlando massacre sparked an Islamophobic backlash, with some radicalscalling for the immediate deportation of all Muslims from the United States and arming U.S. citizens in response. Republican presidential nominee Donald Trump used the occasion to declare himself “right” for his earlier declarations about Muslims, and doubled down by reiterating his earlier call for Muslims to be banned from entering the United States. He also suggested that President Obama might be secretly conspiring on behalf of the terrorists. In the meantime, reporting on the potential terrorist attack on the Los Angeles gay-pride event was subdued, since whatever Howell had been planning was diverted when police pulled him over in a traffic stop and found the arsenal. It was further complicated by the eventual discovery that Howell was himself bisexual, and his friends and family indicated he had no known animus toward gays and lesbians.  In a similar vein, it soon emerged that Mateen had actually frequented Pulse and had advertised on gay hookup forums, . . .
The ongoing questions about the motivations of both Mateen and Howell made murky at best any public understanding of the two incidents – which were seemingly unconnected, especially when it came to the specific motives and backgrounds of the actors involved. One seemed clearly inspired by Islamist anti-western rhetoric, while the other seemed at most fueled by the typical far-right-wing loathing of gays with an added twist of self-loathing. Yet they were in fact deeply connected by the simple reality that both represented acts of domestic terrorism directed at LGBT targets, and both occurred on the same evening, separated only by a few hours. And coming to terms with these acts – both in a realistic sense and with the hope of taking action that actually prevents them from bubbling up in the first place – requires understanding them as closely related, two aspects of the same vicious and hateful coin: right-wing extremism. The murders, and the near-miss, this weekend were not, of course, the first time that gay and lesbian establishments have been the targets of terrorist acts. Indeed, this sort of violence is hauntingly familiar to anyone who has tracked the history of hate crimes and other vicious acts that have been the horrifying reality for most members of the LGBT community for the past half-century and longer.  Until recent years, the violence has emanated primarily from two sources: hate groups, particularly neo-Nazi and skinhead groups as well as various Klan organizations, all of whom have placed the LGBT community as one of their most loathed targets; and far-right evangelical Christians, particularly those who claim that the Bible demands the death penalty for homosexuality, and the radicals who act on those beliefs.

Prior to the terrorist attacks of Sept. 11, 2001, most Americans readily thought of radicals like Rudolph and his far-right cohort, Timothy McVeigh, as the terrorists they clearly were. After 9/11, however, the picture became increasingly muddled, as public and law-enforcement officials, as well as the media, increasingly focused on the image of terrorism as emanating solely from turbaned, Arabic-speaking radicals inspired by extreme Islamic fundamentalism, or Islamism, as it’s popularly known. It’s also worth recalling that the American far right – particularly the neo-Nazis and white supremacists who are among the most vicious homophobes most often associated with hate crimes and terrorist anti-LGBT violence – openly celebrated those Islamist attacks on Americans back in 2001, just as they recently celebrated the Orlando massacre. (Wrote Andrew Anglin, editor of the neo-Nazi website The Daily Stormer: “From the bottom of my heart, and on behalf of all neo-Nazi White supremacists, I want to offer a sincere ‘thank you’ to Omar.") That is because even though the nominal wellsprings of their ideology may differ widely – i.e., either white-supremacist/neo-Nazi ideology or far-right Christianist ideology, or extreme Islamic fundamentalism – the cores of their respective appeals, as well as the psychological profiles of the people they attract as followers, is remarkably similar in nature as well as outcomes. They have the same enemies, and the same targets, because they think and behave in remarkably similar ways.

In the end, both a religious and cultural variations of right-wing extremism. And what they share in common is much more substantial than the differences of their nominal religions. As Joshua Holland recently observed, in an ironic kind of twist, the absolutism associated with the most fanatical expressions of their respective religions, which in turn induces them to denounce “unbelievers” of other faiths, is something they all share: “The details differ, but the defining characteristic of all right-wing religionists is an abiding contempt for religious pluralism. They deny the legitimacy of other faiths. All conservative religious traditions are hostile toward gays and lesbians and those who reject traditional gender roles. Most embrace religious nationalism and reject multiculturalism.” They also share a fundamentalist approach to their belief systems, insisting on the inerrancy whatever their founding scriptures might be – in the case of Islamists, the Koran; of extremist Christians, the Bible; of far-right “Patriot” militiamen, the Constitution of the United States; of neo-Nazis, Hitler’s Mein Kampf as well as a handful of other works that have scriptural import for them. . . . . They all insist that only their interpretation is the correct one. [F]undamentalism is natural byproduct of modern life, representing the needs of the people who are left behind by modernity – economically, culturally, socially, and spiritually. This applies equally to other kinds of fundamentalism, such as the bizarre interpretation of American law and the nature of government that arises in the worldview of right-wing American “constitutionalists.” The terrorists who are produced by these belief systems are all deeply alienated from modern society, and their violence is always directed at the goal of returning society to its “traditional” values.

To fundamentalists and other right-wing True Believers, multiculturalism is an abomination, since the notion of the legitimacy of other religions or belief systems is nonexistent for them. It’s their way or the highway – though only the most nakedly racist among them admit that their hostility to multiculturalism naturally defaults back to a race-based system of white supremacy. In the end, this means that, for the radicals inclined to act out their beliefs violently, the targets of their hatred and violence often are the same. Right-wing extremists almost universally direct their terrorism at the representatives of modernism and multiculturalism in their own minds: democratic institutions and governments, liberals, LGBT folk, various racial and ethnic minorities (especially Jews). [R]adical Islam is a kind of right-wing extremism, and has much more in common with American Klansmen and “Patriots” than any of them are willing to acknowledge. . . . . This is important to place in the larger context of domestic terrorism: As a study I have recently completed of American domestic terrorism between 2008 and the present (to be published later this summer through the Center for Investigative Reporting) demonstrates, American right-wing extremists committed acts of terrorism in the United States at more than twice the rate of domestic Islamist extremists in that time period, with more than double the casualties.

These recent events have all underscored not just the importance of coming to terms with domestic terrorism of all kinds, but of recognizing that Islamist and American right-wing extremist terrorism are very closely related, and often target the very same vulnerable people – as well as understanding that, over those past eight years, American right-wing extremist terrorists (nearly all of whom are white) have been even more dramatically increasing the levels of lethal violence in the country. To understand terrorism, we first have to shed our great national blind spot regarding who commits it – namely, the racial one.