Will November Be a Nightmare for the GOP? 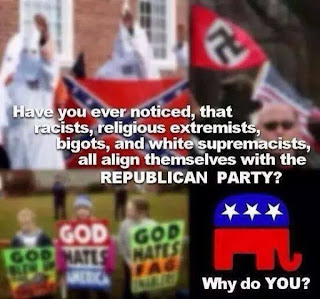 Some former Republicans like myself are smiling with satisfaction as the Republican Party begins to realize that its embrace of ignorance, bigotry and religious extremism over the last two decades as embodied by Donald Trump and his racist, uneducated supporters, may lead to a electoral disaster. For me, nothing would give me more pleasure than to see the GOP lose the presidential election, lose control of the U.S. Senate, and either lose control of or be greatly weakened in the House of Representatives.   For years the GOP has had no long term plan to face the changing demographics and social views of Americans.  For that, not to mention the misogyny it supports, the GOP deserves to die.  A piece in the Washington Post looks at growing Republican concerns that they may be about to reap what they have sown.  Here are highlights:

The hole that Donald Trump has dug for himself keeps getting deeper. On nearly every front, his position continues to deteriorate. Unless he reverses course, Republicans are heading toward a wrenching week at their convention in Cleveland next month, and potentially worse in November.

National polls alone provide an incomplete picture of the current state of the presidential race, but the shifts over the past few weeks should make Republicans beyond nervous.
What looked like a tight contest between Trump and presumptive Democratic nominee Hillary Clinton in late May has morphed into a Trump deficit that cannot be wished away.
The RealClearPolitics poll average now gives Clinton a lead of almost six percentage points over Trump, a marked shift from a month ago. Perhaps even more telling is that every poll on the RCP list that was conducted entirely in June showed Clinton leading. That’s a change from May, when several polls showed Trump leading narrowly.
Given the terrible two weeks Trump has gone through, it is no surprise that the trend line also indicates that Clinton’s lead is widening. The last four polls on the list — all completed in the past week — put her lead at 12, nine, five and six points. Four polls completed earlier in June showed her with leads of three, four, eight and three points.Clinton’s favorable rating was just 43 percent — about the same number she is drawing in a ballot test — while her unfavorable rating was 55 percent. Trump’s favorable rating was a crippling 29 percent, with 70 percent of the public saying they have an unfavorable view of him. A majority of adults — 56 percent — said they have a strongly unfavorable view of him, including one-fifth of Republicans.All of this has put Republicans on edge about November. Trump is frustrated that leading Republicans have not all coalesced behind his candidacy, but without some change on his part, he could be an island of his own in November. Fear of a Clinton presidency remains the lone rationale for many Republicans who otherwise recoil from remarks Trump has made lately.Some of Trump’s supporters have grown weary trying to defend him. Others who put Trump on notice after he attacked on racial grounds the federal judge overseeing the lawsuit against Trump University have found little since to convince them that the presumptive nominee will meet the standard they would like to see. In fact, after Trump’s attack on Muslims in the aftermath of last Sunday’s mass shooting at the Pulse nightclub in Orlando, he seems further than ever from meeting that test.The GOP’s Senate majority is at risk. Republicans hope they can insulate vulnerable Senate incumbents from the Trump effect, but that is no easy task. Only a clean break with the presumptive nominee will give those senators the freedom to campaign on their own. Even the most tepid of endorsements would leave them answerable to everything he might say or do over the next four-plus months.
Despite the obvious weaknesses of Clinton as a candidate, her campaign operation is now far better prepared to wage a general-election campaign than is Trump’s.  . . . . At some point, Priebus may be under pressure to cut loose the candidate at the top of the ticket to save others down the ballot, just as happened in the closing days of the 1996 campaign when the RNC jettisoned presidential nominee Robert Dole in a successful effort to preserve the GOP’s House and Senate majorities.[I]t looks increasingly as if it could become a referendum on Donald Trump, and right now, that’s the last thing Republicans want this fall.