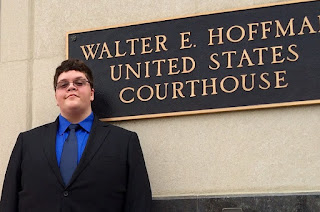 After squandering who knows how much taxpayer money and made their county look like a bigoted backwater to the rest of the nation and the world, the Gloucester County school board went down to final defeat in its war against transgender students.  Today, U.S. District Court judge Robert Doumar - who got a spanking himself by the U. D. Court of Appeals for the Fourth Circuit - ordered the Gloucester County school board to allow transgender boy, Gavin Grimm to use the school system's male restrooms.  Would that the board members who proved spineless when confronted by spittle flecked cranks and Christofascists   had to personally reimburse taxpayers for the wasted funds which might just as well have been placed in a trash can and set afire. BuzzFeed looks at today's much deserved defeat,   Here are highlights:

In the country’s most watched case over transgender student rights, U.S. District Court Judge Robert Doumar ordered a Virginia school district to let a transgender boy use the boys restroom when he returns to high school classes in September.

“I am elated to hear that I’ll be able to attend my senior year of high school with my full rights restored,” Gavin Grimm told BuzzFeed News in a statement. “After nearly two years of humiliation and intense struggle, equality has finally prevailed. Now hopefully other transgender individuals will not have to face this type of discrimination.”
Grimm had sued the Gloucester County School Board in 2015, challenging a policy that bans transgender students from using school restrooms that correspond with their gender identity.

Represented by the ACLU, Grimm alleged the rule violated Title IX of the Education Amendments of 1972 and the Equal Protection Clause of the 14th Amendment.
Judge Doumar had initially thrown out the Title IX claim, despite the U.S. Education Department’s interpretation of the law — that Title IX’s ban on sex discrimination also applied to transgender discrimination. Overturning Doumar on that point, the 4th Circuit Court of Appeals found that the Education Department has the authority to establish that interpretation of Title IX.
[O]n Thursday, Doumar issued a preliminary injunction in Grimm’s favor, stating, “This Court, pursuant to Title IX, hereby ORDERS that Gloucester County School Board permit the plaintiff, G.G., to use the boys’ restroom at Gloucester High School until further order of this Court.”
Joshua Block, a staff attorney for the ACLU who is representing Grimm, said of the injunction, “The writing is on the wall how this case will ultimately end in Gavin’s favor.”
Lawyers for the school board did not immediately answer a question BuzzFeed News about whether they would attempt to appeal the preliminary injunction order.

No doubt we will hear the usual rants about judicial tyranny by ignorance embracing Christofascists even as they strive to force their beliefs on all of society.   Meanwhile, thinking Virginians are embracing the 21st century as opposed to wanting to live by a 12th century version of "natural law."
Posted by Michael-in-Norfolk at Thursday, June 23, 2016