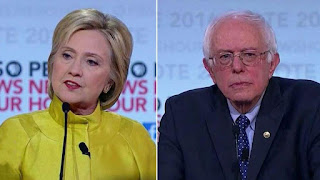 In a stinging main editorial, the Washington Post has slammed Bernie Sanders and, in my view, correctly accused him of denying reality.   That reality being the limited ability a president has to force through change given the divided nature of the federal political structure that requires Congress to enact legislation to solidify change and the fact that presidential executive orders have their limits in what they can accomplish.  As noted before, Sanders and Donald Trump have great sound bites that they like to use, but where are the detailed policy positions, and can any of their proposals realistically be put in place without Congress' support?  Similarly, can sound bites win them the general election.  Here are editorial highlights:

“MADAM SECRETARY,” Sen. Bernie Sanders (I-Vt.) said to Hillary Clinton at Thursday night’s Democratic presidential debate, “that is a low blow.” But was it? Ms. Clinton had just finished pointing out that Mr. Sanders has at times strongly critiqued President Obama. While she made his criticisms out to be more personal in nature than they were, her core point was nevertheless true: Mr. Sanders is running a campaign based on a blistering — and simplistic — critique of the status quo under this Democratic president.

Ms. Clinton, pointing out that Mr. Obama had to fight tooth-and-nail even for relatively centrist solutions such as the Affordable Care Act, draws the lesson that the next president must have a strong sense of practicality and realism; big rallies cannot wish away the complex politics of Congress. Mr. Sanders, by contrast, claims that Mr. Obama had insufficient revolutionary zeal. That’s why he proposed that the incumbent Democratic president be challenged by a primary opponent in 2012.

Of course, Mr. Sanders’s rejection of realism didn’t start when Mr. Obama stepped foot in the White House. At another point in Thursday’s debate, Ms. Clinton pointed out that the senator from Vermont voted against a 2007 immigration reform bill, a bipartisan deal brokered by Sen. Edward M. Kennedy (D-Mass.), that would have made the country’s immigration system a little more rational. Mr. Sanders replied that the guest-worker program it envisioned would have been “akin to slavery” and that groups such as the AFL-CIO and the League of United Latin American Citizens opposed it. Such kowtowing to interest groups and indulgence in hyperbole are not uncommon for senators, who are rarely held accountable for failing to get results. But they would make for a disastrous presidency.

Mr. Sanders regularly assures his audiences that he respects Mr. Obama and Ms. Clinton. But he attacks the pragmatism they have built their legacies on, even though they had no other option. The system — and by this we mean the constitutional structure of checks and balances — requires policymakers to settle for incremental changes. Mr. Obama has scored several ambitious but incomplete reforms that have made people’s lives better while ideologues on both sides took potshots. A key question in the Democratic race is which candidate would duplicate the president’s work and which would settle for rock-throwing.