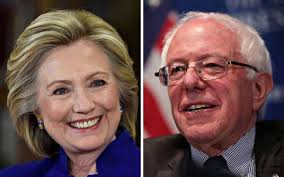 I watched the Democrat presidential debate last night and was once again struck by the difference between it and the largely substance free Republican debates that focus mostly on sound bites and pandering to the racism, religious extremism and general misogyny of the GOP base.  Last night - as in the prior Democrat debate - real substance was discussed and when there were vague generalities, most often they came from Bernie Sanders.  As a piece in the Washington Post notes, the night overall went to Hillary Clinton.  Here are some excerpts:

Winners:
* Hillary Clinton: Beginning to end, this was Clinton's best debate of the election.  In the first half hour, Clinton poked a series of holes in Sanders's health-care proposal and broadly cast the Vermont senator as someone who talks a big game but simply can't hope to achieve his goals.  She was calm and cool throughout -- even when fighting on Sanders's home turf on wage inequality. Clinton also effectively cast Sanders as insufficiently loyal to President Obama, a point that will resound with black voters among whom Obama remains extremely popular.

Clinton was helped by the dearth of questions about uncomfortable topics for her (paid speeches, State Department investigations); when pressed on her super PAC being financed heavily by a few individuals, Clinton was uncomfortable and gave one of her worst answers of the night. But, those moments were few and far between. If she -- and her campaign -- were knocked back after her massive loss in New Hampshire, it didn't show.  She was in total control all night.

Losers:
* Bernie Sanders: If the challenge for Sanders was to show that he could be a candidate for people other than those who already love him, he didn't make much progress toward that goal Thursday night. Sanders did come across as more well-versed on foreign policy than in debates past -- a low bar -- but he struggled to score clean hits on Clinton during the first hour of the debate, which focused exclusively on domestic policy, which should have been his strong suit. Sanders, at times during that first hour, sounded like a broken record -- citing millionaires and billionaires and Wall Street to explain almost anything he was asked.

Then there was Sanders's insistence that he would be better on race relations than Obama, a slip that you can be sure that the Clinton campaign will make sure African American voters hear about (and then hear about some more) in the coming days and weeks.

Perhaps Sanders' biggest problem, as noted by the husband who is usually good at picking up on average voter reactions is that Sanders comes across as always angry - something that in general election could prove damaging.
Posted by Michael-in-Norfolk at Friday, February 12, 2016