Why Millennials Should Reconsider Hillary Clinton 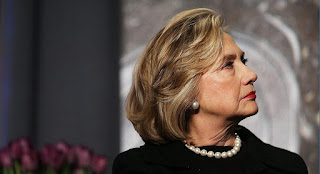 Both last night and throughout the day to day - and likely until the South Carolina primary results are in - the bloviating pundit class has been tearing into Hillary Clinton's campaign and, in some cases, trying to draw parallels between Hillary's collapse in 2008 and today.  On the Democrat/liberal side, many are whining that Hillary is no progressive yet ignore the frightening policies that a Republican in the White House would usher in, especially for LGBT Americans and the working poor and the beleaguered middle class.  If things are bad now, they would only be worse under a Republican president who might get to appoint two more Antonin Scalias to the U.S. Supreme Court. A piece in Huffington Post makes the case as to why Millennials may want to rethink their support for Bernie Sanders.  Here are some excerpts:

So why Clinton, then?   If the claim is that Sanders isn't radical enough, why would it make any sense to cast your vote for a candidate that is decidedly less progressive? This is perhaps the most valid and difficult question of the 2016 Democratic Primary. Here are a few of my best guesses:

1. When you're this disenchanted about politics, there's an acknowledgement that you have to play the game a little to get things done.  Since many Americans have already grieved the political process as inherently corrupt and vile, the insistence that Democrats should place less emphasis on running a politically savvy campaign and more emphasis on running a "genuine" one seems kind of silly. When, just by virtue of the fact that someone is involved in politics, you consider every candidate to be an "establishment" candidate, you might as well vote for someone with reasonable, clear, and attainable goals that chip away at our biggest barriers to progress. Clinton is by no means a radical, and is arguably not even a progressive: but, as she has been quick to point out in recent days, neither are Obama, Biden, and many others revered by this party when held to the Sanders measuring stick. And while Jonathan Chait's piece making "A Case Against Bernie Sanders" didn't do enough to give Bernie credit for the work he's done for our country and the riveting campaign he's managed to run, it makes valid points about the limited role of the presidency. The likelihood of Bernie's ability to effect revolutionary change in the areas where he shines, which are not ones in which the president typically has much sway, seems slim.
2. There are still good reasons for a radical young person to vote for a less radical candidate.  ...particularly if that young person values honesty and transparency. If there's anything I'm more skeptical of than a politician, it's a politician that claims to be unlike the rest. Part of the appeal of Hillary Clinton is that, while definitely not a radical, she doesn't claim to be either. She acknowledges that she tends toward the moderate and effective and away from the radical and divisive. I've yet to hear her backpedal when asked about campaign support from corporate donors. Hillary is not a revolutionary, but ideological transparency still has some sway with me.

3. The repercussions for many Americans in the event that we nominate Sanders and he loses are much greater for some than for others.  I do believe it's important to acknowledge that the fear that Sanders might not beat Cruz or Rubio is a very real fear, and that fear is substantiated by far more than Bernie's eccentrics or his religion (or lack thereof). It is much easier to vote for the candidate that most closely upholds your values when his likely loss in a general election wouldn't have palpable repercussions for you. Cruz is a disaster when it comes to women's issues, and Rubio has already threatened/promised to appoint a Supreme Court Justice that would work to overturn same-sex marriage. We barely have to discuss the dreadful repercussions to many Americans if Trump somehow continues the charade. Undeniable sexism in this country aside and despite Sanders's own claims that have spurred media polls limited in scope, Clinton is a far more electable candidate, and playing it safe does matter to me: because I want access to healthcare, because I want employment rights and anti-discrimination laws upheld, because I want to be able to use the bathroom without paying a fine, because I don't want my friends or their families to get deported. The consequences of losing this election are real and would have a grave effect on many. Speaking of "electability"....

4. The "socialist" problem is, in fact, a problem.  It's unfair to say that politically moderate or independent voters are opposed to a self-described socialist in office because they are afraid of the word or have misconceptions about its meaning. While that may be true for some, those voters are unlikely to vote for a Democratic nominee to begin with. It's insulting to moderate or undecided voters to assume that their opposition to socialism in the White House is a result of fear or misinformation. The real reason that many people don't want socialism in the White House is that they aren't socialists. Most Americans simply aren't: a fact that seems surprising to many in my generation. And most Americans, myself included, want a revolution that honors and amends the principles of democracy and competitive markets. Believe it or not, there are many of us who still think that great change is possible, and that that change doesn't require a revolution of political ideology. Most Americans, even those who want or are waiting for a real revolution, want a revolution that is both truly new and truly American. A self-described socialist who repeatedly points to other countries as superior models of fair and effective governance simply rubs me the wrong way, and I lean way further left than your average voter. I may have lost hope for a genuine and incorruptible candidate long ago, but I have not lost faith in American ingenuity, competitiveness, and resolve.

5. We should actively consider whether Sanders' proposals address the root of inequality in this country.  We should consider whether an economy run on socialist principles actually addresses the issues that have led to such a devastating state of inequality. Most of Sanders' proposals involve a huge expansion of federal regulation and control. This would require citizens to have a substantial amount of trust in a few men and women in the White House to fairly, effectively, and equitably regulate certain industries to acceptable standards. And when you've never been treated fairly or equitably by your government before, why should it feel comfortable to give that government a much greater degree of control? I believe in democracy and free markets because I value my right to make choices, and I value that right because my government, historically, has not. If Sanders ever got free, universal healthcare for everyone to pass, why would anyone, in the context of our history and the systemic oppression of women and people of color that was largely endorsed and perpetrated by the federal government, trust that same government to ensure that my needs are met?

If you're a young Sanders supporter, ask yourself this: have you ever been to a public health clinic? If every doctor's office is to be a federally regulated clinic, the reality is we will need substantially more healthcare workers and they will be paid substantially less. This is also true of free public higher education: teachers, most of whom barely make a living to begin with, will be paid substantially less, and I've yet to hear Sanders' solution to that inevitability--in fact, I haven't even heard the question posed. We should consider valuing choices more than we value having everything for free. I want it to be possible for everyone in this country to make choices. And if that isn't the case now, which it isn't, the problems are much more significant than amending the Affordable Care Act or lowering the costs of education. First we have to identify the problem: systemic racism and sexism. Then, we have to address it. I am not confident that making healthcare or education completely free either addresses or solves these problems.

Where I stand apart from Sanders and his supporters is with regard to what a revolution in a democracy looks like. To me, it's about fixing deep-seated ethical and ideological problems that put marginalized populations at a fixed disadvantage in a competitive economy. I want my revolution to ensure that every American citizen can take part in our democracy and make their own choices, including demanding the best healthcare and the best education, which requires a competitive market. I don't support Sanders' brand of revolution because I haven't quite given up on American potential yet. My millennial friends might call that pie-eyed and unrealistic, but bear in mind that's the same thing everyone is saying about Sanders, and about you.