The GOP - the Time Loop Party 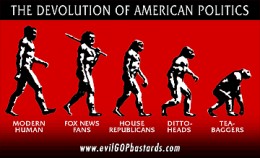 If one watches and listens to the Republican presidential candidates, you can close your eyes and in many respects what you hear being said bears little difference from what one heard 36 years ago.  Other than tax rates, the goal is to return to the 1950's or perhaps early 1960's before the country began to rapidly change with both the sexual revolution and the acceleration of a much more diverse demographics.  That world is gone forever, yet the GOP continues to cling to the same mantras that have been proven wrong by experience and objective fact over and over ago.  A column in the New York Times looks at this disconnect from reality which seemingly is only getting worse as the GOP increasingly looks as if it is one huge insane asylum.  Here are column excerpts:

By now everyone who follows politics knows about Marco Rubio’s software-glitch performance in Saturday’s Republican debate. . . . .  Not only did he respond to a challenge from Chris Christie about his lack of achievements by repeating, verbatim, the same line from his stump speech he had used a moment earlier; when Mr. Christie mocked his canned delivery, he repeated the same line yet again.

In other news, last week — on Groundhog Day, to be precise — Republicans in the House of Representatives cast what everyone knew was a purely symbolic, substance-free vote to repeal Obamacare. It was the 63rd time they’ve done so.

Mr. Rubio’s inability to do anything besides repeat canned talking points was startling. Worse, it was funny, which means that it has gone viral. And it reinforced the narrative that he is nothing but an empty suit. But really, isn’t everyone in his party doing pretty much the same thing, if not so conspicuously?

The truth is that the whole G.O.P. seems stuck in a time loop, saying and doing the same things over and over. And unlike Bill Murray’s character in the movie “Groundhog Day,” Republicans show no sign of learning anything from experience.

Think about the doctrines every Republican politician now needs to endorse, on pain of excommunication.

First, there’s the ritual denunciation of Obamacare as a terrible, very bad, no good, job-killing law. Did I mention that it kills jobs? Strange to say, this line hasn’t changed at all despite the fact that we’ve gained 5.7 million private-sector jobs since January 2014, which is when the Affordable Care Act went into full effect.

Then there’s the assertion that taxing the rich has terrible effects on economic growth, and conversely that tax cuts at the top can be counted on to produce an economic miracle.

This doctrine was tested more than two decades ago, when Bill Clinton raised tax rates on high incomes; Republicans predicted disaster, but what we got was the economy’s best run since the 1960s.

Oh, and there’s also the spectacular failure of the Kansas experiment, where huge tax cuts have created a budget crisis without delivering any hint of the promised economic miracle.

But Republican faith in tax cuts as a universal economic elixir has, if anything, grown stronger, with Mr. Rubio, in particular, going even further than the other candidates by promising to eliminate all taxes on capital gains.

Meanwhile, on foreign policy the required G.O.P. position has become one of utter confidence in the effectiveness of military force. How did that work in Iraq? Never mind: The only reason anybody in the world fails to do exactly what America wants must be because our leadership is lily-livered if not treasonous. And diplomacy, no matter how successful, is denounced as appeasement.

So how did this happen to the G.O.P.? In a direct sense, I suspect that it has a lot to do with Foxification, the way Republican primary voters live in a media bubble into which awkward facts can’t penetrate. But there must be deeper causes behind the creation of that bubble.

[Rubio] he wasn’t the only person on that stage spouting canned talking points that are divorced from reality. They all were, even if the other candidates managed to avoid repeating themselves word for word.

As I note repeatedly, one of the deeper causes of the descent of the GOP into insanity is the party's embrace of the Christofascists - who are by definition living utterly detached from reality.  That sickness has now spread across the GOP as sane and rational people have fled the party and ugly elements such as white supremacists have replaced them.
Posted by Michael-in-Norfolk at Monday, February 08, 2016