How Similar are Trump and Sanders? 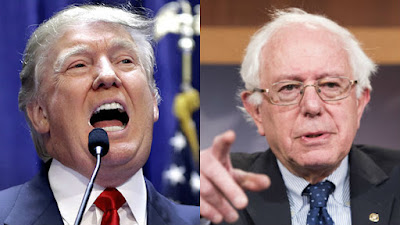 One thing that both Donald Trump and Bernie Sanders are claiming is that they have caused disengaged voters who have shunned politics in the past.  Both also claim to be electrifying younger voters, although the claim seems more appropriate for Sanders.  There are other similarities between the two candidates - the use of scapegoats, over simplified offered solutions, a refusal to hold voters accountable for the results of their own past disengagement  and/or voting against their own interests after falling for race baiting and feigned religiosity - as noted in a main editorial in the Washington Post which may outrage Sanders supporters.  Yes, there are huge differences between the extravagant, narcissistic Trump, but the similarities should be noted.  Here are editorial excerpts:

Donald Trump, the Republican victor, and Vermont Sen. Bernie Sanders, the socialist victor on the Democratic side. The similarities are important — but the differences are more so.

Both have positioned themselves as outsiders appealing to voters who believe the system, and the leaders of the two major parties, have failed them. The grievances they speak to are real: a sense that the economy has left too many people behind, that globalization and technological change are helping the few while stranding the many.

Both Mr. Trump and Mr. Sanders offer convenient scapegoats and simple-sounding solutions. For Mr. Sanders, the “greed” of the “billionaire class” has rigged the system against working people. Tax the 1 percent, and everyone else can have free college and free health care. Political obstacles can be swept away by a “political revolution.” America’s enemies will be fought by a mythical Sunni Muslim coalition. The villains for Mr. Trump are “stupid” people running the government who allow foreigners to take advantage of the United States. The solution — well, his solution — is to elect Mr. Trump.

We think both men are dangerously if seductively wrong in their facile diagnoses and prescriptions. But Mr. Sanders’s platform is at least well-meaning. We think forcing working people to subsidize, through their taxes, the college tuition of wealthier Americans is not a progressive policy; we believe Mr. Sanders has not leveled with Americans about the true costs of single-payer health care. But few would object in theory to more widely available education and health care.

By contrast, Mr. Trump’s proposals are pernicious as well as preposterous. There is no way to round up 11 million illegal immigrants and deport them — but no one should want to live in a nation that would attempt such a thing. Nor would most Americans want a government that deliberately kills the innocent relatives of terrorists.

Mr. Trump is mocking the democratic process, not engaging in it. He feels no obligation to explain how he would implement his ideas, and he does not care whether his statements are true. Thousands of Muslims in New Jersey did not publicly celebrate the downing of the World Trade Center towers in 2001, but Mr. Trump is content simply to repeat the lie. And lies come easily to Mr. Trump because, unlike Mr. Sanders, he does not believe in anything other than his own brilliance.

[T]the most essential difference between these two outsider campaigns: the utter ugliness of Mr. Trump’s. To further his ambition, he has gleefully demeaned Hispanics, Muslims, Jews, people with disabilities, blacks and anyone else he can present as the “other” as he proceeds to exploit the nation’s divisions. As president he would not be able to deliver on his promises, and it is fearful to contemplate the scapegoats he might find to distract from his failures.

Posted by Michael-in-Norfolk at Thursday, February 11, 2016