The Problem With the Word "Queer" 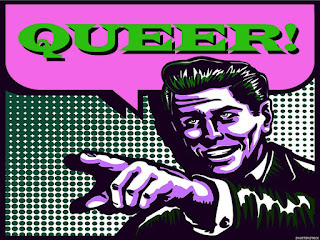 Yet another internal controversy has reared its ugly head in the LGBT community: attempts to use the word "queer" to describe the community at large.  The tempest has been launched by certain activists and the Huffington Post's decision to change "Gay Voices" to "Queer Voices." An opinion piece in The Advocate - which I agree with 100% - makes the case that the move is a huge mistake and that rather than unifying the LGBT community, it will alienate many.  I for one won't use it and believe the term plays directly into the hands of our Christofascist enemies.  It could likewise dampen my enthusiasm to support organizations that use the term, which I despise.  Here are excerpts  from the column:

There seems to be yet another controversy in our community this week. The issue du jour is The Huffington Post changing its dedicated LGBT site’s name from Gay Voices to Queer Voices. While there are strong opinions on both sides of this issue, when I heard about it, it brought a smile to my face.

Since the beginning of my activism back in 1969, I’ve witnessed our community’s attempts to unite over a word or term to define ourselves. There was “homosexual,” “homophile,” “gay,” “gay and lesbian,” and most recently, and most accepted, “LGBT.” So what about “queer”?

HuffPost’s reasoning? “We, like many others before us, have chosen to reclaim ‘queer.’ ‘Queer’ functions as an umbrella term that includes not only the lesbians, gays, bisexuals and transgender people of ‘LGBT,’ but also those whose identities fall in between, outside of or stretch beyond those categories, including genderqueer people, intersex people, asexual people, pansexual people, polyamorous people and those questioning their sexuality or gender, to name just a few.”

While the word “queer” is popular with young LGBT activists, many in our community detest it. Reclaiming a derogatory word is not a new trend. Some of us used to use the word “faggot.”

Maybe we should attempt to solve some of the hard-core issues in our community rather then spending time debating semantics. While all individuals have the right to identify with whatever term or image they wish for themselves, and that should be respected, the word-reclaiming, like that in the black community, will eventually be passé.

So if you spend any capital or time on this, you’re ignoring issues such as homelessness, poverty, employment discrimination, the need for housing to protect our seniors, and anti-trans violence. Those are problems I’d rather address, not a word — and especially not one that some of the most endangered people in our community see as another barrier.

I hope Huffington Post will rethink its idiocy.  Many of us have worked hard for changed attitudes and put ourselves on the line socially and at work and do not need to be labeled by a derogatory term. As for organizations that are stupid enough to adopt the term, they can plan on seeing a stop in the flow of checks from me!!
Posted by Michael-in-Norfolk at Thursday, February 11, 2016

I remember when the chief of police in my city said, "we don't hassle the queers." He probably didn't even realize the paradox.

Because of that, I can't call people I care about "queer".

But I do admit that it's much easier to say than "algae bee tea".