Is Kasich Almost as Bad as Trump? 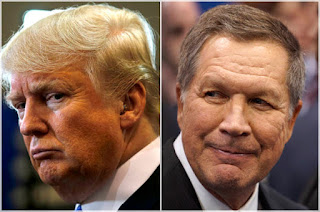 With the dust settling in the aftermath of the New Hampshire primary, some GOP presidential candidates have already dropped out of the race - e.g., Chris Christie and Carly Fiorina - and others are finding themselves to increased scrutiny as their chances seemingly improve.  One such candidate is John Kasich who in relative terms - relative being the operative term - seems less extreme than Donald Trump or Ted Cruz.  But some, including many in Ohio from some Facebook commentary, are beginning to make the case that Kasich's campaign persona is a facade that hides much of the same ugliness that Trump, Cruz and Rubio exhibit.  A piece in Salon takes a look at what is perhaps the real Kasich.  Here are highlights:

Donald Trump is a hemorrhoid of a human being, at times seeming more like an experiment in how much you can bamboozle conservative voters before they get a clue. The man wants to ban Muslims from coming to our country and says that the Obama-enthralled media is hiding a 42 percent unemployment rate.

Under the circumstances, it’s tempting to contrast Trump with some of his Republican opponents, seeing in them the compassion and common sense that Trump lacks. It is also a mistake to do this, because they are different flavors of the same poisonous gruel.

The Huffington Post’s front page, alas, fell into the “Trump is evil, so his opponent must be nice!” trap on Wednesday morning.

The piece, written by Ryan Grim, focuses almost exclusively on the rhetoric of John Kasich, the Ohio governor who came second in New Hampshire after Trump, praising him for “a message of civility, empathy and moral purpose in a race dominated by fear and race-baiting.”

And it’s true that Kasich loves to tell people how compassionate he is. But it’s a claim that should be taken about as seriously as Ted Cruz’s insinuations that he’s a prophet from God or any of the deliciously over-the-top bragging statements that Trump issues about himself. Kasich has an avuncular demeanor that helps him sell this “compassionate” image, but an actual look at his beliefs and policies shows that he’s throwing up just as much a front as any of these Republicans.

To be fair, Grim does mention, in passing, that Kasich has worked to undermine women’s health care and the right of workers to unionize, but that barely touches the surface when it comes to the rot exuding from the Kasich administration. If you start to dig in, it becomes clear that Kasich is no more a “compassionate” man than Donald Trump is, and the struggle in the Republican Party is one of aesthetics, not substance.

[E]xamine whether Kasich is really any better. (Spoilers: No.)

Racist. Sure, Kasich passes the extremely low bar of not retweeting neo-Nazis approvingly, but don’t let Kasich off the hook here. Kasich was already a huge proponent of putting harsh restrictions on welfare, an issue that has risen to prominence mainly because of racist urban legends about black people living indolently on food stamps instead of working.

As governor of Ohio, Kasich made this racial subtext undeniable in 2014 and 2015, by targeting minority populations for food stamp cuts while letting white people keep getting their food stamps.  As Mother Jones explains, the entire state of Ohio was eligible for an emergency extension on food stamp eligibility due to economic distress, but Kasich decided to grant it only to 16 counties in 2014 and 17 in 2015.

“Most of these were rural counties with small and predominantly white populations,”Hannah Levintova of Mother Jones writes. “Urban counties and cities, most of which had high minority populations, did not get waivers.”

Sexist. Sure, Donald Trump said the word “pussy” out loud, something we can safely assume Kasich does not do, perhaps even in the privacy of his own home. But what Kasich has done to women is much, much worse than a naughty word or a degrading comment. The man has a single-minded obsession with punishing the women of Ohio for having sex.

Kasich has signed a series of anti-choice bills that have shut down half the abortion clinics in his state. He signed a provision requiring abortion clinics to have a medically unnecessary transfer agreement with local hospitals, and then turned around and banned public hospitals from making such agreements.

Kasich has  no love for contraception, either, rewriting budget rules in an arcane and hard to understand way for the sole purpose of stripping family planning clinics of money they use to make contraception affordable to low-income women.

Xenophobic. Trump wants to ban Muslims from entering this country. Kasich “just” wants to ban Syrian refugees — people who are fleeing a horrific civil war that is being stoked by actual Islamic extremists — from coming in. . . .  In a way, it’s worse, because folks like Kasich are pretending it’s reasonable to treat Muslims like a categorical threat.

Demagogue. Kasich presents himself as a reasonable person and it’s easy to get lulled by his ability to speak wonk into thinking he might be one of the few decent humans left in the Republican Party. But a perusal of his website shows he’s just as eager to push demagogic conservative talking points as any other Republican in the race: Promising to “repeal and replace” Obamacare without really talking about what it will be replaced with (answer: nothing), striking poses about the “sanctity of human life” when all he means is denying women reproductive health care instead of actual life-promoting policies like making sure everyone has food and shelter, and even claiming that he’s “lifting up the most vulnerable Americans” by, you guessed it, cutting off the assistance they need to get back on their feet.

Trump is a repulsive man, no doubt about it. But let’s not let his repulsiveness lull us into believing the slightly less obnoxious version peddled by men like Kasich is any less damaging.