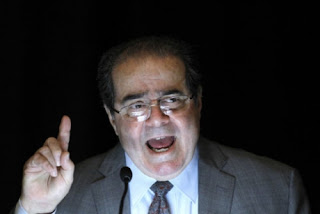 Having been out at a dinner party and having partaken of a number of cocktails, my thoughts of the passing of Supreme Court Justice Antonin Scalia will have to wait until morning.  As regular readers know, I have argued for quite some time that Scalia needed to be removed from the Court because of his refusal to remain non-partisan and to adhere to the rules of judicial conduct that govern other federal judges. That said, a few comments from friends and fellow activists may sum up the feelings of many.  One said "He might not be in a better place. But we certainly are."  Another said "I know it's wrong but, it's hard not to feel happy about this news. It's wrong wrong. But, I cannot find another emotion that fits."

Scalia was stridently anti-gay, anti-woman, and anti-minority.  If there is a God and a Hell, Scalia may be learning how wrong he was on so many things.  I would be lying if I said that I would mourn the man's passing. In many ways he embodied what is wrong with the nation's judiciary.  It is very telling that Republicans in the U.S. Senate are vowing to block any Obama appointee even though their office requires that the consider and vote up or down on presidential nominees. All they are showing is that they are as unfit for office as Scalia had become.
Posted by Michael-in-Norfolk at Saturday, February 13, 2016

There is the saying that about the dead, nothing but good should be said.

So let me send Antonin Scalia off with the same encomium I used for Ronald Rotten, William Rehnquist, Robert Bork, Saddam Hussein, and Moamar Ghaddafi. "Antonin Scalia is dead. Good!"

Sen. Mitch McConnell, in 2005, defending the absolute right of a sitting president to nominate judges.

"The Constitution of the United States is at stake. Article II, Section 2 clearly provides that the President, and the President alone, nominates judges. The Senate is empowered to give advice and consent. But my Democratic colleagues want to change the rules. They want to reinterpret the Constitution to require a supermajority for confirmation. In effect, they would take away the power to nominate from the President and grant it to a minority of 41 Senators."
"[T]he Republican conference intends to restore the principle that, regardless of party, any President's judicial nominees, after full debate, deserve a simple up-or-down vote. I know that some of our colleagues wish that restoration of this principle were not required. But it is a measured step that my friends on the other side of the aisle have unfortunately made necessary. For the first time in 214 years, they have changed the Senate's 'advise and consent' responsibilities to 'advise and obstruct.'"


Take it from Sen. Mitch McConnell: for the Senate to block a sitting president from nominating a Supreme Court nominee—not just a specific nominee, mind you, but any nominee at all, would put the Constitution of the United States itself at stake. And he's a patriot, so he would never even consider such a thing.