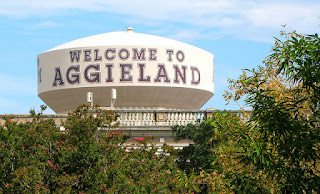 The increasingly blatant racism of the Republican Party and the remaining occupants of the GOP clown car seems to be sending a message that racist conduct is acceptable. Under the GOP's ideology, the First Amendment gives free rein to all nature of bigotry be it hate-filled racism or anti-gay bigotry.  As written and intended by the Founding Fathers, the First Amendment granted limited rights: (i) no government censorship of the press and political statements, (ii) no forced taxpayer support of an established church, and (iii) the freedom to worship in the denomination of one's choice without government interference or sanctions. The New Civil Rights Movement looks at a recent incident in Texas that shows how badly the Founder's vision has been perverted.  Here are highlights:

In yet another bitter reminder that racism is alive and well on college campuses in the South, white students at Texas A&M University reportedly taunted and harassed a group of black high school juniors who were touring the campus in College Station on Tuesday.

The incident began when a white woman approached two of the visitors from Uplift Hampton Preparatory in Dallas — a charter school that helps economically disadvantaged students get into college — and asked what they thought of her Confederate flag earrings, according to an account from Democratic state Sen. Royce West, whose district includes the high school.

Then, white male and female students from Texas A&M began taunting the group of 60 visitors from Uplift Preparatory, telling them to "go back where you came from" and "using the most well-known racial slur that's directed toward African Americans," West said.

Texas A&M officials who were escorting the visitors witnessed the incident and called campus police. An officer who responded initially said the A&M students were merely exercising their First Amendment rights, but police eventually took a report.

In an example of the systemic racism that still exists, some have pushed back, trying to claim it didn't happen, despite witnesses, or that it shouldn't be addressed.


In its 2016 college rankings, The Princeton Review ranked Texas A&M University fourth in the nation for "Most Conservative Students," 14th for "Most Religious Students," and 13th for "LGBTQ-Unfriendly."

The Texas A&M student body is just 3 percent black, the lowest percentage among 15 public and private universities in the state, according to the National Center for Education statistics.

Note the correlation between the university's racism and religiosity.   Sadly, many - if not perhaps most - conservative Christians - are racists even as they congratulate themselves on their piety.  Here in Virginia, scratch the back of a follower of The Family Foundation and you will find a potential KKK member or other form of white supremacist.  Conservative Christianity is a societal evil.
Posted by Michael-in-Norfolk at Saturday, February 13, 2016