Why I am Not Feeling the Bern 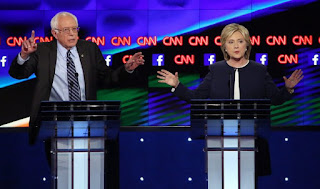 As noted last night in a post, I like some of the issues that Bernie Sanders is talking about, but I continue to have doubts on his ability to win in the general election and, even if he were to win, whether any of his proposals could ever be implemented.  On some issues, he's like Donald Trump: sound bites and slogans, but short on any substantive or detailed plans.  Yes, America's healthcare system remains badly broken and Americans continue to pay far more than in any other country in the world for one of the least effective systems.  Yes, big money in politics is a serious problem, but does Sanders offer any viable solution?  Yes, the system is rigged and the middle class have been sold down the river, often by appeals to racism and religious extremism.  But can Sanders really work a change.  Then there's foreign policy.  What does Sanders propose in detail?  A piece in Huffington Post summarizes many of my misgivings.  Here are excerpts:


I began this campaign as a Hillary fan who respected Bernie Sanders and what he had to say about the economy and U.S. politics. I'm not surprised that this message has appealed to so many people, both those I know, and those I don't, in part because it's something which has gotten less attention than it has deserved, even if there are problems with elements of it.

In my calmer moments, I think that the Sanders campaign might represent a positive shift for the discussion of certain topics within the Democratic Party and the broader populace. Listening to him over the past year, however, I began to increasingly believe that for all the positive things his campaign represents, it also represents something deeply problematic: a fetishization of not knowing.

For me, this probably began with the discussion over foreign policy. . . . .  I think there is space for multiple proposals about what we do now, and though I'm sympathetic to much of what Obama is doing and Hillary is suggesting continuing, I would have thought a liberal candidate for the presidency would have been talking about the need for increased foreign aid, or greater openness to refugees, or, well, something.

Instead, his primary comment on international affairs seems to be to reiterate and reiterate and reiterate that he had voted against the Iraq War in 2002. When forced to discuss other matters, he quickly bobbles. In the most recent debate, he seemed unsure about whether North Korea has a single or multiple dictators, and then managed to take both positions in a matter of minutes about whether the U.S. should negotiate without preconditions with other countries.

Now, Bernie Sanders is not the first candidate to not be an expert on even something as significant as foreign affairs. But what's deeply troublesome here is how he seems to have no respect for knowledge on it. It's visible in the almost-disdain he expresses for Hillary Clinton's experience on the matter. She had been Secretary of State for four years, but he has been in Congress for more than two decades. Exactly when does he think he'll have sufficient experience to speak fluently on foreign policy?

Even more disconcerting has been his apparent unwillingness to find advisers to help bridge the gap. It was only 15 years ago that Democrats mocked George Bush Jr.'s disinterest in foreign policy; he at least had the courtesy to be embarrassed by what he didn't know, and hired a staff, including professors of international relations and former Secretaries of Defense, to help. They proved to provide much terrible advice, but there was at least an effort to appear informed. Sanders hasn't done so.

But foreign policy isn't a crucial part of the Sanders campaign. Health care, though, is. Five years ago, Sanders proposed a universal health care bill that failed to get any co-sponsors. When he was reticent to provide information about what plan he was proposing now, the Clinton campaign started to criticize that bill. In response, Sanders withdrew his support of that bill, meaning it now had zero support. Shortly before the Iowa caucuses, Sanders proposed a new plan, which was written by Gerald Friedman, a professor of economics at U-Mass Amherst, whose research focused on the history of the labor union movement in France and the U.S. The plan would cost in the area of $14 trillion over 10 years . . . .

When the Sanders campaign was presented with this disparity, as well as others, they quickly attacked Thorpe, and then changed their numbers to acknowledge $444 billion per year of increased costs, but also, instantaneously, magically, found the same number of savings elsewhere. This is not how somebody tries to suggest a serious effort to improve the deeply problematic health care plan in the U.S.

For efforts to promote human rights, these are the people one would expect to have the most understanding of how to do so. One of the fascinating things about this campaign has been seeing how so many of those who should know Bernie Sanders the best, and have worked the hardest on what would appear to be his issues, have been so eager to oppose him. He spent more than a decade in the House; of the 188 Democrats there now, two endorsed him, and 157 endorsed Hillary.

Sanders has focused on issues relating to the labor movement; virtually every single major labor union has endorsed Hillary Clinton.

Again and again, when the Sanders campaign learns of these moves, the emphasis is on their being parts of the establishment. And they are parts of an establishment. But if this establishment is the enemy, then on whose side is he?


Feel free to leave your comments.
Posted by Michael-in-Norfolk at Wednesday, February 10, 2016