"Marcobot" Struggles to Find His Footing 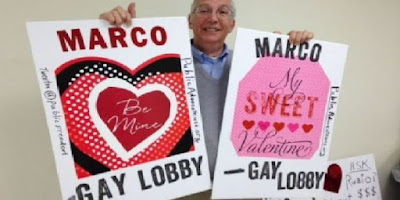 Things seemingly have been going to Hell in a hand basket for Marco Rubio over the last week.  Rubio started out the past week cocky after a 3rd place finish in Iowa. Perhaps it was a case of pride going before fall.  For icing on the cake, Northern Virginia lunatic and gad fly Eugene Delgaudio is (pictured above) now assailing Rubio accusing him of being part of the "Homosexual Lobby" in light of Rubio's  support from pro-gay billionaire Paul Singer.  A piece in Politico looks at Rubio's possibly tettering campaign.  Here are excerpts:

He was supposed to be giving Donald Trump a run for his money. Instead, Marco Rubio could be on the verge of blowing it.

With just hours before New Hampshire begins voting, Rubio looked dead on his feet, delivering the “low-energy” performance Trump has so effectively attached to Jeb Bush.

We face a critical moment,” Rubio told a group of more than two-dozen BAE employees. “I tell anyone who will listen, 2016 will be a turning point for America.”

New Hampshire could be a turning point in his candidacy, as well.

Rubio was expected to finish second here, propelled by a strong third-place showing in Iowa. His biggest goal — trounce Jeb Bush and force some of the establishment lane candidates to drop out in order to consolidate support and poach donors from other camps.

But after a week of getting repeatedly beaten up — first by his Republican opponents for giving a canned stump speech and not engaging with the press, and then for his dismal debate performance Saturday — it’s unclear he’ll be able to best Sen. Ted Cruz or the cadre of governors like John Kasich, who have spent significant time campaigning here.

And the donors who had been looking favorably at Rubio's camp have become less enthusiastic after his debate performance Saturday, when he froze up and awkwardly repeated one of his talking points on President Barack Obama's agenda to change the country.

Excuse me if I refrain from getting out a tiny violin for Marco.
Posted by Michael-in-Norfolk at Monday, February 08, 2016